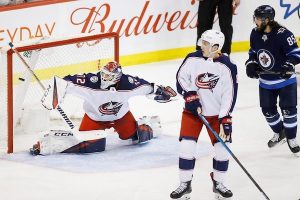 That approach paid off Thursday when Kyle Connor scored with 1:14 remaining in the third period to lift the Jets to a 4-3 victory over the Columbus Blue Jackets.

“We’ve done it enough this year that we have a lot of confidence that we know we don’t have to change our game,” Wheeler said. “We can continue to play the same way for 60 minutes.

Winnipeg also came from behind to beat the Bruins 4-3 in a shootout in Boston on Tuesday.

With their victory Thursday, the Jets extended their home win streak to six games and handed the Blue Jackets their four straight loss.

Mark Scheifele scored his team-leading 26th goal of the season, with Wheeler picking up his 54th assist. Mason Appleton and Jack Roslovic also scored and Jacob Trouba had a pair of assists.

Connor Hellebuyck made 28 saves for the Jets (33-16-2), who were starting a three-game homestand.

Artemi Panarin scored his 20th goal and added one assist for Columbus. Josh Anderson had a power-play goal and Oliver Bjorkstrand also scored. Seth Jones contributed a pair of assists.

Columbus led 2-1 after the first period and 3-2 after two, but Roslovic tied it up at 8:47 of the third when his shot went into the corner with 17 seconds left in a Winnipeg power play.

“It sucks to lose that way in the last minute,” said Columbus forward Nick Foligno. “Guys played really hard, played to our identity tonight and just doesn’t sit well with me getting scored on late like that.”

Connor was coming off a change and took a pass from Bryan Little and beat Bobrovsky over his stick.

“The puck got rimmed down low to Bryan and he made an incredible pass on his backhand there and found me in the slot,” Connor said. “Just tried to get it off quick.”

Columbus leading scorer Cam Atkinson was hit in the face by a puck during warmup and replaced by Mark Letestu. Head coach John Tortorella had no update after the game.

Despite the loss, Tortorella was satisfied with his team’s performance.

“I thought our guys rallied together and played a good game,” Tortorella said.

Tortorella was yelling on the bench when a play late in the third period with the game tied was stopped after defenceman Zach Werenski fired a shot that hit the back of Jets forward Brandon Tanev.

The coach wouldn’t comment on it, but Werenski did.

“We had them hemmed in for a while there and I thought they were pretty tired and (Tanev) makes a good block, but the puck comes right back to us,” Werenski said. “I think he starts getting up and they blow the whistle, so it’s definitely a little frustrating.

“I know where the ref’s coming from, he wants to make sure the player is OK. First and foremost, that’s the most important thing, but I know where I hit him, right in the mid-to-low back, so you could kind of tell it wasn’t anything up high, so it’s definitely frustrating for us.”

Wheeler helped open the scoring after a Columbus turnover when he set up Scheifele for a one-timer that beat Bobrovsky at 4:34 of the first.

Ryan Murray sent the puck between the skates of a Winnipeg defender right to Panarin’s stick and he fired it over Hellebuyck’s glove to tie it at 8:52. Panarin has a three-game point streak with a pair of goals and three assists.

Anderson go the go-ahead goal on the power play when Panarin found him in the slot at 13:30.

Appleton made it 2-2 when his backhand shot hit Bobrovsky and trickled under the netminder at 13:21, but 57 seconds later Bjorkstrand regained the lead for the visitors.