By David Paddon, The Canadian Press 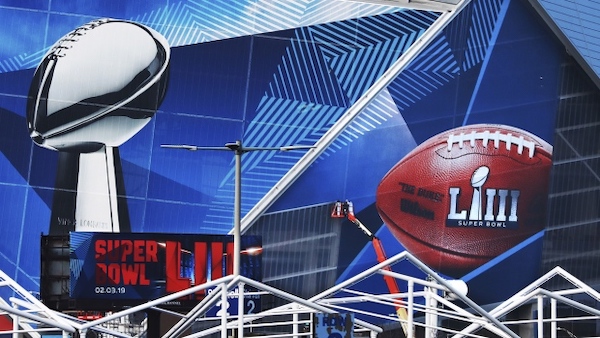 Workers use a lift to install a Super Bowl 53 wrap on the outside of Mercedes-Benz Stadium in Atlanta, on Jan. 17, 2019. (Curtis Compton / Atlanta Journal-Constitution via AP)

TORONTO — Sunday’s battle between the New England Patriots and the L.A. Rams could possibly be the last Super Bowl game to be available in Canada in its original form — ads and all — through American broadcasts.

Until 2017, Canadian viewers were blocked from the full U.S. Super Bowl feeds, including the commercials that are often produced specifically for the event, as domestic broadcasters were able to substitute their own versions of the broadcasts carried by cable and satellite.

Since then, the Canadian Radio-television and Telecommunications Commission has prevented simultaneous substitution, or simsub, during the game despite protests from Bell Media and the NFL.

That rule is set to be rescinded by the government, as part of its renegotiated trade agreement with the United States and Mexico, but the deal has not yet been ratified.

For now though, Bell Media’s ads during pre- and post-game programming will replace the U.S. ads on the American channels only until kickoff, about 6 p.m. ET on Sunday, and after the game’s final play.

“This means that viewers tuning to the Canadian channel airing the game see Canadians ads, while those tuning to the U.S. channel see the American ads,” the CRTC says on its website.

Bell Media’s coverage will be on CTV, CTV2 and TSN specialty sports channels.

Purplebricks tells viewers in a series of ads that they can avoid “commisery” — the pain of realizing they could have saved thousands of dollars by using its agents, who are paid a flat fee rather than sales commissions.

Canada’s largest private sector union is also a last-minute entrant in the annual Super Bowl advertising contest, with a pair of commercials designed to save a GM assembly plant in Oshawa, Ont., that’s set to close this year.

In English, the commercial repeats some of Unifor’s main complaints against the automaker’s plan to shift more of its production to Mexico and concludes: “If you want to sell here, build here.”

But the most prominent Canadian content in this year’s Super Bowl advertising lineup will likely be singer Michael Buble, who’s pitching “bubly” sparkling water for Pepsi during both Canadian and American programming.

Bell Media spokesman Scott Henderson said in an email that the company had sold all of its available Super Bowl time, and that it doesn’t reveal what it charges advertisers for Super Bowl spots.

The Supreme Court of Canada is considering a Bell-NFL challenge to the CRTC’s authority to impose the regulation, under an appeal of lower-court decisions.

But the court fight may be moot.

Under Annex 15-D of the new trade agreement, Canada agreed to rescind the CRTC’s 2016 Super Bowl policy so that the NFL’s programming doesn’t receive less favourable treatment than other programming from the U.S. that’s retransmitted in Canada.

In effect, the treaty recognizes that the football league — as owner of the Super Bowl programming rights — has the authority under copyright law to decide who can retransmit its programming.

Watching #SBLIII this Sunday? @CTV, @TSN_Sports and @RDSca will be airing Canadian ads. @CBS will be running the American ads. https://t.co/OUV1jagL4V pic.twitter.com/0SKAivBmZr