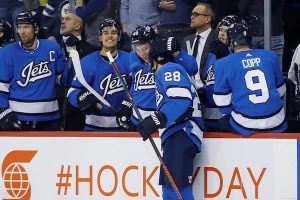 WINNIPEG — Jack Roslovic had a hat trick as the Winnipeg Jets scored a franchise-record six goals in the first period on their way to a 9-3 victory over the Anaheim Ducks on Saturday.

Roslovic, who left the morning skate because of cramps and was a game-time decision, scored his first career hat trick with three power-play goals and added an assist.

Bryan Little scored twice and had one assist. Andrew Copp, Blake Wheeler, Brendan Lemieux and Tyler Myers also had goals for Winnipeg (34-16-2), which has won three straight and seven consecutive games at home.

Connor Hellebuyck made 26 saves for the Jets and was credited with an assist in the second game of a three-game homestand.

John Gibson only stopped eight of the 14 shots he faced before being pulled after Lemieux’s goal at 17:41 of the first period made it 6-0. Chad Johnson made 14 saves in relief.

Anaheim was coming off a nine-day break and welcomed back three players from injury. Corey Perry made his season debut after undergoing knee surgery on Sept. 26. Patrick Eaves had been out 33 games because of a broken rib and Jakob Silfverberg had missed four games with a hamstring injury.

But before Anaheim even had a shot on goal in the first period, Copp scored at 2:07 and Roslovic made it 2-0 with his first of the game at 5:26.

Gibson was beat by a variety of shots; from a Roslovic breakaway, a Wheeler rebound, a Lemieux wraparound and a two-on-one with Little and Dmitry Kulikov, who was playing in his 600th NHL game.

The Jets outshot the Ducks 14-4 in the opening frame, but Anaheim responded with two straight goals in the second by Ritchie at 1:32 and Sprong at 13:54.

Myers made it 7-2 when he redirected an Appleton pass into the net at 14:42 and Roslovic caused hats to rain down from the stands with his third goal with 21 seconds remaining in middle frame.

While the Jets only had the 10-9 shot advantage in the second period, they continued to make their shots count.

Little tipped a point shot from Chiarot that went by Johnson 54 seconds into the third, but Shore scored for the Ducks at 12:17 to make it 9-3.

Winnipeg hosts San Jose on Tuesday and Anaheim plays in Toronto on Monday.