Frigid Winnipeg: Does One of the Planet’s Coldest Big Cities Need Warming Centre? 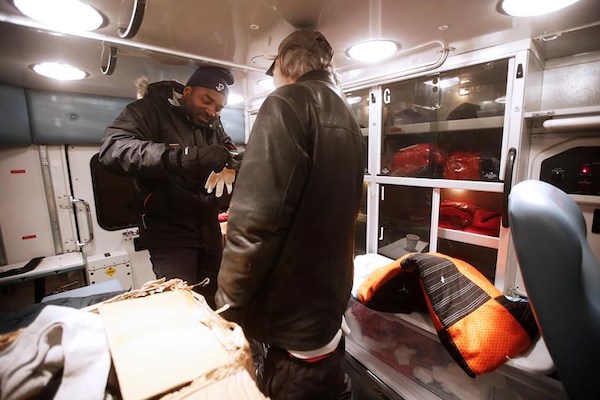 Peter Oyeniyi (left), a van outreach worker in the Salvation Army Extreme Environment Response Vehicle, assists a man to put gloves on his frozen hands as they drive around Winnipeg streets and assists people who are suffering under the extreme temperatures in the early hours of Saturday morning, February 2, 2019. (THE CANADIAN PRESS/John Woods)

WINNIPEG — In a city where winter can be almost guaranteed to bring temperatures below -30 C, saving homeless people and other vulnerable persons from severe frostbite or even death is a complex project.

It relies on a lot of goodwill and elbow grease from Winnipeg’s non-profit groups and, despite efforts, street people still often need to shuffle between spots to find somewhere warm to stay at certain times of day.

“The city needs a central place … where people can come and go and feel safe there, and where there’s no sobriety restrictions,” says Nancy Chippendale, an activist who has waged a lengthy battle on social media to try to persuade city hall to set up a 24-hour warming centre.

She feels any such centre would have to be run by the government instead of relying on non-profits, which have different rules, capacities and operating hours at their shelters.

As it stands now, she said, homeless people move between fast-food restaurants, shopping malls, the downtown library and soup kitchens. And when those locations close for the night, the outdoors can be the last option.

Toward the end of an extreme cold snap recently when wind-chill values fell below -50, Mayor Brian Bowman said there is always some space available at shelters as they co-ordinate among themselves — even if a specific one is full.

He suggested city-run warming centres, such as ones in Toronto, can present their own challenges.

“What we were advised by the agencies that are in the business of providing this care is that if you open up a space, you need to make sure that it’s properly staffed for the protective safety and well-being of those that are provided it.”

Figures provided to The Canadian Press by Manitoba’s chief medical examiner’s office show 24 people died from hypothermia in Winnipeg between 2010 and 2017. They were among 100 hypothermia deaths across the province in that period.

The office did not release details of why people were out in the cold unprotected, but said a common element was intoxication. Of the nine people across the province who died of hypothermia in 2017, eight had high levels of alcohol or drugs in their systems, the office said.

Some high-profile cases in recent years involved people who were not homeless but were vulnerable in other ways.

Windy Sinclair, 29, was found frozen to death in 2017 after leaving a Winnipeg hospital without being discharged. She was not homeless, but was struggling with a crystal meth addiction and was under the drug’s influence when she was brought in.

A man who was known to shelter staff, but who had been housed, froze to death in Winnipeg last year, said Adrienne Dudek of the Main Street Project, a non-profit that runs the only major shelter in the city that takes intoxicated people.

“He actually was housed, and for some reason did not make it back from wherever he was coming from,” Dudek said.

Contrary to the mayor’s comments, there are times when there is simply no room for some people at shelters, said Dudek. Main Street’s facility has been full on occasion and intoxicated people have nowhere else to go.

“That’s where you start to see people more in the Winnipeg Transit bus shacks,” she said.

“They’re survivalists. Quite often, people who aren’t comfortable staying in shelters in general, or are not able to access a shelter, will find other public places.”

Even if there were more shelters, some people would not necessarily take advantage of them.

The Main Street Project and the Salvation Army run outreach vans with workers that comb the streets at night to offer people warm clothing and a ride to a shelter.

“Some people just say, ‘No, I’m not going to a shelter,'” Maj. Rob Kerr of the Salvation Army said. On one recent cold night and early morning, van workers spoke with 43 street people and not one wanted a ride to a shelter, he said.

“We obviously can’t force someone … we will come circle back around in an hour or so and check on them.”

“If there was one new central place and it was advertised so that people were aware of it … that would provide a place of refuge, a humane place — almost like a coffee shop where everyone is welcome.

“To me that’s a true place of dignity, a 24-hour place welcome to all.”

← Previous: Winnipeg Under Snowfall Warning for 10-15 cm Next: Woman Crashes Stolen Truck After Being Woken Up Behind the Wheel →
Tags: Weather | Winnipeg | Winter