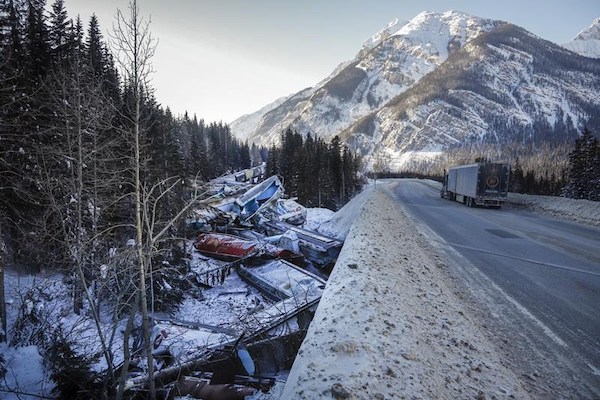 FIELD, B.C. — A Canadian Pacific freight train fell more than 60 metres from a bridge near the Alberta-British Columbia boundary in a derailment that killed three crew members, a union representative said Monday.

The westbound freight jumped the tracks at about 1 a.m. near Field, B.C.

Greg Edwards with the Teamsters Canada Rail Conference said the workers had just taken over the train east of the town.

“Everybody I’ve spoken with both within the company and within the union is just devastated by this,” he said. “It’s just terrible, terrible news.”

He said the locomotive fell into the Kicking Horse River. Two of the men were found outside and the other was still inside.

“I got the call in the middle of the night and it’s one of the worst calls that you want to take,” Edwards said.

The railway said in a statement that conductor Dylan Paradis, engineer Andrew Dockrell and trainee Daniel Waldenberger-Bulmer were killed in the derailment.

President and CEO Keith Creel said he was deeply saddened to learn of the deaths, which he said will have a long-lasting affect on CP’s family of railroaders.

The railway will not speculate on the cause as it “owes it to those involved to get it right,” Creel said, adding the company remains focused on the safety of its employees and first responders, as well as working closely with the families of the deceased.

Creel said the company is also working with Parks Canada and other agencies to ensure the environment is not negatively impacted. Recovery will be complex and challenging given the remote location and extreme weather, he added.

“As we work to safely recover from this tragedy, we do so with our fallen colleagues in mind,” he said.

A man who identified himself as Waldenberger-Bulmer’s father wrote on Facebook that he had lost one of the “jewels” in his crown.

“He will be sadly missed by me his father and ‘mentor’ as he loved adventure and challenge as I do,” wrote Albe Bulmer, who did not immediately return a message seeking further comment.

The union said the crew was based out of Calgary. Edwards said the engineer had more than two decades of railroad experience.

The train had three locomotives and 112 cars — smaller than the 135-car trains the railway tends to run, Edwards said. The train was carrying grain to Vancouver.

David Karn, a spokesman for the B.C. Environment Ministry, said between 30 and 40 grain cars left the tracks in the derailment. He said the situation was being monitored and there was no immediate word of fuel or other contaminants entering the water.

“Cold isn’t good for train brakes and things, but we’ve been operating in the winter for years and years and years,” he said. “We’ve dealt with winters ever since they invented the railway in Canada.”

Edwards said it would be tough for equipment and recovery crews to get access to the ravine near the Spiral Tunnels where the accident happened. The tunnels were built 110 years ago to help trains traverse the treacherously steep Kicking Horse Pass.

Railway spokeswoman Salem Woodrow said in a statement that there will be a full investigation to determine what caused the derailment.

The Transportation Safety Board said it had sent a team of investigators to the site.

Sixteen cars from a CP train derailed on Jan. 3 in the same area. No one was hurt in that derailment.

The union said eight railway workers have died in Canada since November 2017 and investigations into those accidents are ongoing.