Home » The Canadian Press » ‘Not Anything the Crew Did:’ TSB Says Fatal Train Derailment Started on Its Own

‘Not Anything the Crew Did:’ TSB Says Fatal Train Derailment Started on Its Own 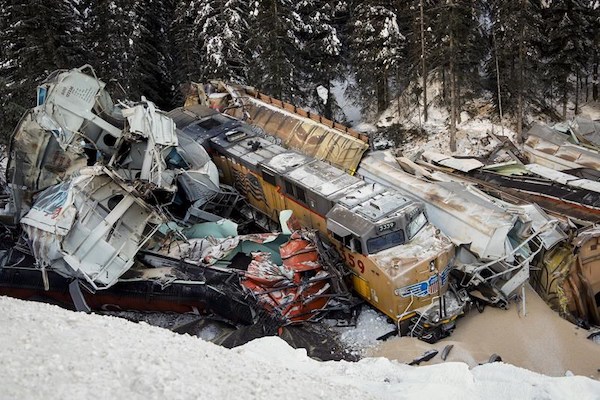 CALGARY — A Canadian Pacific freight train parked on a frigid night in the Rocky Mountains began to move on its own before a derailment that killed three workers and sent 99 grain cars and two locomotives hurling off the track.

The Transportation Safety Board says the westbound train had been parked on a grade with its air brakes applied for two hours near Field, B.C., just west of the Alberta-B.C. boundary, when it started rolling. The handbrakes were never applied.

“It was not anything the crew did,” senior investigator James Carmichael said Tuesday. “The train started to move on its own.”

He said the Calgary-based crew was taking over the train east of Field on Monday because the previous workers were nearing maximum work hours. The new crew was not yet ready to depart when the train started moving around 1 a.m.

He said the train consisting of 112 cars and three locomotives was carrying grain to Vancouver and gained speed well in excess of the 32 km/h maximum for the tight turns in the mountain pass.

It barrelled along for just over three kilometres before it derailed at a curve ahead of a bridge over the Kicking Horse River. Only 13 cars and the tail-end locomotive remained on the tracks.

“The lead locomotive came to rest on its side in a creek and a number of derailed cars came to rest on an embankment,” said Carmichael. “The remaining cars, including the mid-train remote locomotive, piled up behind.”

The crew was in the lead unit, which was severely damaged. Carmichael said the data recorder had not yet been retrieved from that locomotive.

The accident happened between the Lower and Upper Spiral Tunnels in Yoho National Park, which were built 110 years ago to help trains traverse the treacherously steep Kicking Horse Pass.

“This territory’s among the most challenging railway territory in North America,” said Carmichael. “Investigators and others are working hard under challenging circumstances to fully understand what went so terribly wrong.”

A GoFundMe site to help Paradis’s family said he is survived by his wife and two young daughters.

“He was kind, hilarious, hard working, easy going, and IN LOVE with his family. They were everything to him,” said the page set up by Marie Armstrong.

Waldenberger-Bulmer’s twin brother Jeremy — also a CP Rail conductor — said it feels like half of him is gone. He said his family is feeling an “emptiness in our home that is indescribable.”

He said in a statement that his brother had just started working for the railroad in November.

“He was loving it and knew he would make a lifetime career out of it. We had big plans of living out our careers with CP Rail and retiring together to golf all over the world. He and I would go golfing any chance we got in the summer. That was our thing to do.”

The derailment sounds “eerily similar” to the 2013 Lac-Megantic rail disaster in Quebec in that both involved a freight train rolling down a grade, said Garland Chow, a professor with transportation expertise at the University of British Columbia’s Sauder School of Business.

But there’s a big difference, he said, in that no one was on board when the Lac-Megantic train derailed, killing 47 people in the town. The Transportation Safety Board concluded not enough handbrakes were applied.

Chow noted that the transportation board said the crew in B.C. was not responsible for the train starting to move. As soon as it began rolling, the crew would have tried to stop it, Chow suggested, so it’s possible the air brakes failed.

“It’s either process or equipment or behaviour,” he said. “If the processes were done right and the behaviour was right, it has to be the equipment. … Something must have failed to allow the train to go down that hill.”