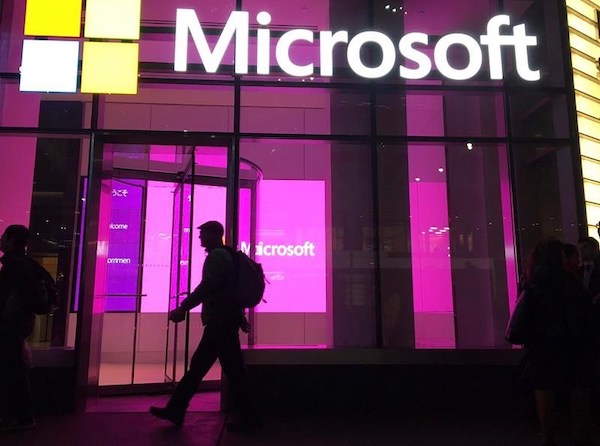 People walk near a Microsoft office in New York on November 10, 2016. (THE CANADIAN PRESS/AP, Swayne B. Hall)

OTTAWA — As a federal election approaches, Microsoft is offering advanced online threat-detection tools to Canadian political candidates and parties to shore up their cyberdefences.

Microsoft’s AccountGuard, designed to warn customers about cyberthreats — including attacks by nation-states — will be provided free to registered parties at the federal and provincial level, think-tanks and democracy advocacy organizations that already use the company’s Office 365, Outlook.com and Hotmail products.

In providing the tools, the company is mindful that Russian intelligence agents stand accused of hacking Democratic party emails and computers during the 2016 U.S. presidential campaign.

Jan Neutze, global director for cybersecurity policy at Microsoft, said one of the favoured techniques of cybercriminals and state-sponsored hackers remains the spear-phishing email — an innocent-looking message that can lure those who click on it into giving up their private credentials or other vital details.

That can open the door to data theft or stolen emails that may be used for damaging leaks or extortion.

Microsoft’s monitoring team will help detect malicious activity against accounts, try to determine the source of the attempted intrusion and inform customers of threats.

Many organizations in politics have small staffs and modest budgets, Neutze noted.

“Yet they’re facing nation-state adversaries. And so it’s a total mismatch in terms of their capabilities to defend themselves versus the threats that they’re facing.”

Some, but not all, larger organizations such as political parties have started to take more protective measures, he said. “I think there’s a recognition that oftentimes organizations aren’t necessarily able to defend against these threats by themselves.”

The Liberal government recently announced that an impartial group of senior bureaucrats would warn Canadians if malicious actors try to distort the outcome of the October election through serious cyberattacks or orchestrated disinformation campaigns via social media.

The protocol is part of a series of measures aimed at preventing interference in the election.

← Previous: Chill Out with New Winter Bike Activities at The Forks Next: A Tale of Volunteerism in Two Cities: Jackman-Atkinson →
Tags: Canada | Crime | Ontario | Ottawa | Technology