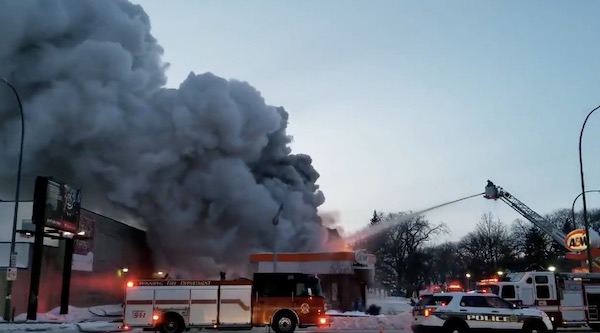 Winnipeg firefighters were served up heavy smoke, intense heat and other dangerous conditions as they battled a blaze that eventually destroyed a fast-food restaurant.

Flames were licking through the roof of an A&W outlet on Main St. when crews arrived at the scene shortly after 5 p.m. Sunday.

Officials say the smoke and heat prevented firefighters from getting inside early on to bring a quick end to the emergency.

All staff and customers got out safely and there are no reports of injuries.

Traffic in the area was disrupted and fire personnel were at the scene well into the evening.

Eyewitness Tony Sawicz says many people initially appeared to be oblivious to the fire and continued to line up in the restaurant’s drive-thru lane.

There is no word on the damage estimate.