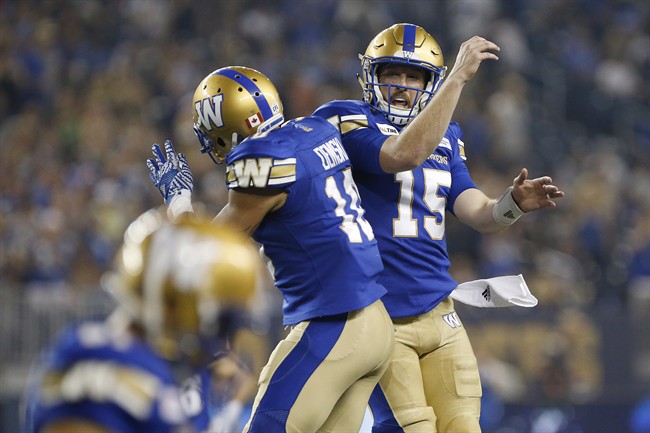 Winnipeg Blue Bombers quarterback Matt Nichols (15) and Nic Demski (10) celebrate Demski’s touchdown during the second half of CFL action against the Hamilton Tiger-Cats, in Winnipeg on Friday, August 10, 2018. (THE CANADIAN PRESS/John Woods)

The Winnipeg Blue Bombers have re-signed receiver Nic Demski to a two-year contract.

The Winnipeg native and former Manitoba Bison became a free agent on Tuesday.

After three years with the Saskatchewan Roughriders, Demski enjoyed a stellar first season with the Blue Bombers in 2018.

Demski finished third in both rushing and receiving yards for the Bombers, pulling in 59 passes for 554 yards and three touchdowns, while rushing 34 times for 248 yards and one more score. He also returned 26 kicks for 374 yards.