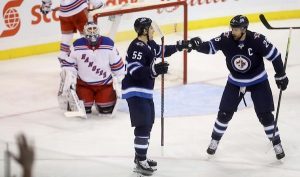 The top-line centre scored twice and added one assist as the Jets held off the New York Rangers for a 4-3 victory.

“He’s not stopping,” said Jets forward Andrew Copp, who scored the game-winner. “He’s obviously having a fantastic year. He puts in the work on the ice, off the ice.

“He’s as dialed in as it gets. It ain’t stopping now, so buckle up.”

Defenceman Joe Morrow recorded his first goal of the season and added an assist for Winnipeg.

Connor Hellebuyck made 34 saves for the Jets (36-18-3), who were starting a three-game homestand. Winnipeg has at least a point in its past nine home games (8-0-1).

Mika Zibanejad scored twice and Pavel Buchnevich had the other goal for the Rangers. Mats Zuccarello added two assists and Henrik Lundqvist stopped 32 shots for the Rangers (24-24-8), who were beginning a four-game road trip.

“I always say it’s nice to see the bounces go in, but we didn’t win today so it doesn’t really matter,” Zibanejad said of notching his 24th and 25th goals of the season.

Scheifele and linemate Blake Wheeler are tied for the team lead in points with 68 each.

“Playing with two unbelievable players so I’m pretty lucky,” Scheifele said. “On any given night we try to do everything for each other. That one guy gets rewarded.

“If it’s a guy driving the net or taking a hit or blocking a shot or having a good stick, that’s what we do for each other all over the ice. I was lucky tonight to get two.”

The game was tied 2-2 heading into the third period, but Zibanejad’s second goal of the game at 57 seconds made it 3-2 for the visitors.

Winnipeg responded with goals from Morrow and Copp 1:58 apart to take a 4-3 lead.

Lundqvist was disappointed their come-back effort didn’t pay off.

“I feel like, even myself, I battle in this game to try to make the right things and get rewarded but the result is the same,” Lundqvist said. “And it’s very disappointing for us as a group, but even for me personally.”

The Jets had mounted a 2-0 lead in the first period on Scheifele’s pair of goals.

The Rangers delivered their own pair of goals in the second period, striking early with Zibanejad’s first goal at 38 seconds when the puck went off a post and in.

Buchnevich tied it 2-2 with 17 seconds remaining in a New York power play when he redirected a shot by Ryan Strome at 19:19.

The Jets took another penalty with 18 seconds remaining in the period and the Rangers capitalized early in the third.

“I think it’s a good sign we battled back,” Rangers head coach David Quinn said. “We turned the switch on which isn’t easy to do when you play that poorly in the first to come out the way we did in the second and third.”