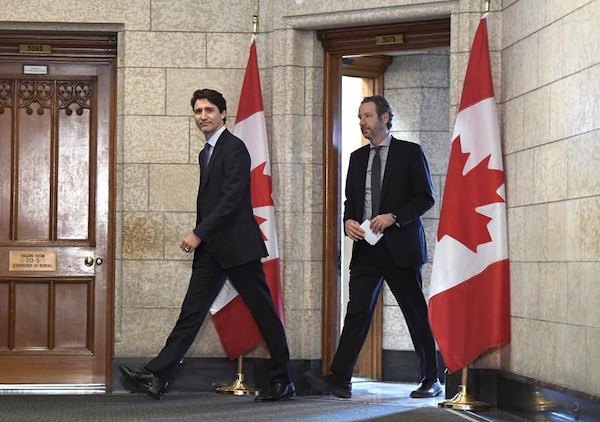 Prime Minister Justin Trudeau leaves his office with his principal secretary Gerald Butts to attend an emergency cabinet meeting on Parliament Hill in Ottawa on Tuesday, April 10, 2018. Butts has resigned amid allegations that the Prime Minister’s Office interfered to prevent criminal prosecution of SNC-Lavalin. (THE CANADIAN PRESS/Justin Tang)

In a statement, Butts unequivocally denies the accusation that he or anyone else in the office improperly pressured former attorney general Jody Wilson-Raybould to help the Montreal engineering giant avoid a criminal case on corruption and bribery charges related to government contracts in Libya.

Nevertheless, Butts says the allegation is distracting from the “vital work” Trudeau is doing so it’s in the best interests of the Prime Minister’s Office for him to step aside.

“I categorically deny the accusation that I or anyone else in his office pressured Ms. Wilson-Raybould … At all times, I and those around me acted with integrity and singular focus on the best interests of all Canadians,” he says.

“Any accusation that I or the staff put pressure on the attorney general is simply not true … But the fact is that this accusation exists. It cannot and should not take one moment away from the vital work the prime minister and his office is doing for all Canadians.

“My reputation is my responsibility and that is for me to defend. It is in the best interests of the office and its important work for me to step away.”

Wilson-Raybould resigned from Trudeau’s cabinet last week. She has not explained why and she has not commented on the allegation, levelled by anonymous sources in a Globe and Mail story 10 days ago, that she was improperly pressured, citing solicitor-client privilege. She has hired a former Supreme Court justice to advise her on what she may legally say.

Butts is one of several top Trudeau aides the opposition parties had wanted to call before the House of Commons justice committee to testify on what happened. Liberal MPs on the committee last week used their majority to limit the scope of the committee’s inquiry.

Butts has confirmed that Wilson-Raybould briefly raised the matter of SNC-Lavalin during a meeting in December; he advised her to speak with the clerk of the Privy Council, Michael Wernick.

In his statement, Butts writes positively of his relationship with Wilson-Raybould.

“I encouraged her to run for the Liberal Party of Canada and worked hard to support her as a candidate and then cabinet minister. From my perspective, our relationship has always been defined by mutual respect, candour and an honest desire to work together.”

Butts says he’s served Trudeau “to the best of my abilities and I have at all times given the prime minister free and unfettered advice.

“I have served the public interest, not the interests of any individual or any narrow private interest of any kind, at any time. Life is full of uncertainties but I am absolutely certain of that.”

Trudeau, who became friends with Butts when the two attended McGill University, tweeted about his principal secretary’s resignation: “Gerald Butts served this government — and our country — with integrity, sage advice and devotion. I want to thank him for his service and continued friendship.”