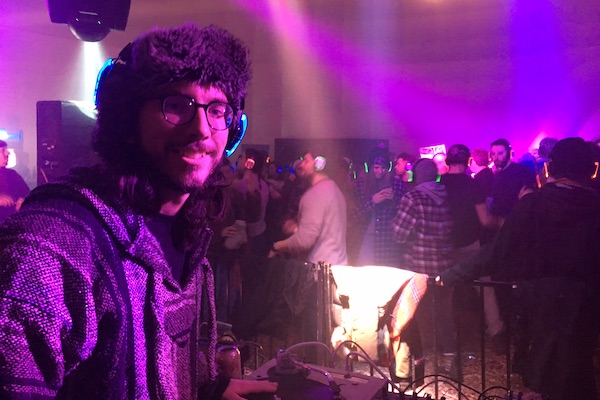 DJ A-Luck says people had no problem getting into the concept of Silent Disco at The Dome Sunday night. (MICHELLE BAILEY / CHRISD.CA)

WINNIPEG — It’s a little strange when you swing open the door to “The Dome” tent at Festival du Voyageur to take in a nighttime dance party where the crowd is moving in response to music… yet there is no music blasting in the room.

That’s because they’re all dancing to what they hear streaming through brightly lit wireless headphones.

Silent Discos (also known as Silent Clubbing or Silent Raves) is a new event this year at Western Canada’s largest winter festival and is enjoying a rebirth in popularity with nightclub crowds.

Those who filled the venue Sunday night were soaking up the beats via wireless headphones and bouncing on the wood-chipped dancefloor to music supplied by three DJ’s spinning tunes up at the front.

Three channels (identified on the headphones as red, blue and green) separated what the DJ’s were each playing. Participants could switch back and forth on the headphones to listen to what they wanted to dance to.

Winnipeg based DJ’s A-Luck, Mav-One, Vothra, Mark-Me Low, AYGE and Home Cookin’ are all involved in the Silent Disco at Festival (which will take place again this Thursday, Friday and Saturday from 8 p.m. to midnight). 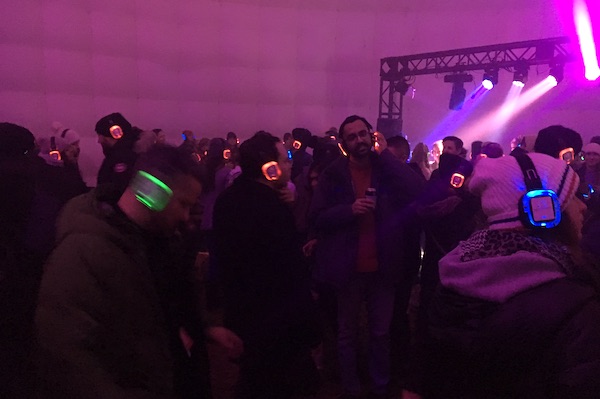 DJ A-Luck said the fun really ramps up when the DJ’s notice a bunch of people tuning in to a certain song and singing loudly to it.

“Everyone is really pumped up and that’s when we know we are into a friendly competition with each other as to who can get the crowd going with our choice of music,” he said.

DJ A-Luck said the event has been very well received over the first three nights with participants getting into the concept and discovering the fun it provides.

“If you want to pull off the headphones for a bit to talk to your friends, you can without trying to battle with one stream of loud music,” he said. “And then you can just put them back on and continue dancing.”