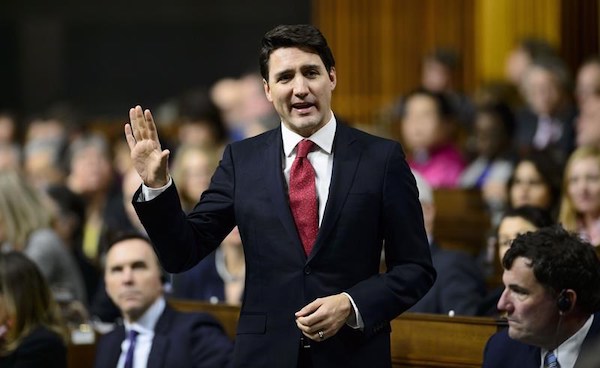 Prime Minister Justin Trudeau stands during question period in the House of Commons in West Block on Parliament Hill in Ottawa on February 5, 2019. (THE CANADIAN PRESS/Sean Kilpatrick)

OTTAWA — Opposition parties are demanding Prime Minister Justin Trudeau call a public inquiry and waive solicitor-client privilege to get to the bottom of allegations that his office pressured the former attorney general not to prosecute a Canadian corporation.

MPs returned to the House of Commons Tuesday morning after a break week that saw the resignation of cabinet minister Jody Wilson-Raybould and Trudeau’s principal secretary Gerald Butts.

Their first orders of business were a motion by the NDP to call a public inquiry into the events leading to those resignations and a motion from the Conservatives demanding Trudeau waive solicitor-client privilege to allow Wilson-Raybould to tell her side of the story. Motions are not binding but they force MPs and ministers to take public positions by voting and they can put pressure on the government.

The situation involves anonymous allegations that when Wilson-Raybould was the attorney general she was influenced by the Prime Minister’s Office to allow a remediation agreement with Quebec engineering giant SNC-Lavalin, rather than proceed to a criminal prosecution on charges of fraud and bribery related to the firm’s work in Libya.

Butts was not specifically named in the accusations but he said Monday he was resigning because he had become a distraction to the government’s work. He insists he has done nothing wrong.

Critics questioned why Butts would resign, in that case, and the woman at the centre of the allegations has yet to give her side of the story.

Wilson-Raybould was moved within cabinet from justice to veterans affairs in January and then resigned from cabinet last week. She has yet to say anything publicly and has hired former Supreme Court justice Thomas Cromwell to advise her on what she can say, given the solicitor-client privilege that covered her dealings as attorney general.

Conservative Leader Andrew Scheer said Tuesday that Canada cannot claim to be a country based on the rule of law if the Prime Minister’s Office is dictating the course of justice.

“The prime minister has kept her silent in order to protect himself,” Scheer alleged.

NDP MP Charlie Angus said the Liberals are trying to “walk the clock down on one of the worst corruption scandals in memory.”

Virani said the ethics commissioner Mario Dion is investigating and is best placed for the task because he’s unaffected by political rhetoric.

The House of Commons justice committee last week agreed to take on a study of the matter as well, but the Liberals rejected opposition calls for Butts, Wilson-Raybould and other members of the Prime Minister’s staff to appear. The committee is meeting Tuesday afternoon for a further discussion on the scope of the study but that meeting will happen behind closed doors.

Trudeau also met with his cabinet Tuesday morning for the first time since the allegations arose. The prime minister normally stops to speak to reporters on his way into weekly cabinet meetings but walked by without saying a word. Several cabinet ministers who did stop reflected briefly on Butts’s contribution to the government.

Newly appointed Minister of Rural Economic Development Bernadette Jordan said the government is not in crisis.

Finance Minister Bill Morneau said he has “an enormous amount of respect” for Butts.

“My sense is that he’s decided — and I think appropriately — to defend himself against, you know, people saying things that just aren’t true,” said Morneau.

Some cabinet ministers also seem to want to know more about what happened between the Prime Minister’s Office and Wilson-Raybould. Infrastructure Minister Francois-Philippe Champagne, however, echoed Virani’s position that the ethics commissioner is the best official to help with that.

“Obviously everyone, every Canadian, all of us, we want to shed some lights on the recent events,” he said. “I’m very happy personally that the ethics commissioner, which is impartial and independent, has taken the task to bring the light to that.”