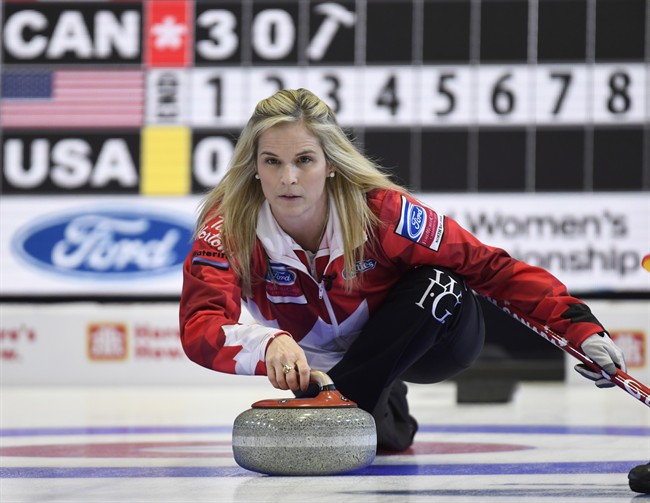 Canada skip Jennifer Jones delivers a stone against the United States during the semifinal at the World Women’s Curling Championship in North Bay, Ont., Saturday, March 24, 2018. (THE CANADIAN PRESS/Paul Chiasson)

With the wins, Silvernagle and Jones both improved to 4-2 and guaranteed themselves of at least a spot in a tiebreaker game for the championship round, which starts on Thursday.

Jones and Silvernagle sit one win behind the Pool B co-leaders — Suzanne Birt of Prince Edward Island and Casey Scheidegger’s wild-card team.

P.E.I hammered Kerry Galusha 15-5, dropping the Northwest Territories rink to fifth in Pool B at 3-3.

The final Pool B draw was scheduled for Wednesday night.

The final Pool A draw was slated for Wednesday afternoon. Alberta’s Chelsea Carey (6-0) secured first in Pool A on Tuesday, leaving Manitoba’s Tracy Fleury, Ontario’s Rachel Homan, Northern Ontario’s Krista McCarville and B.C.’s Sarah Wark (all 4-2) in the battle for the other three playoff spots.

The top four teams in each pool advance to championship round play. The Page playoffs begin Saturday and the final is set for Sunday.