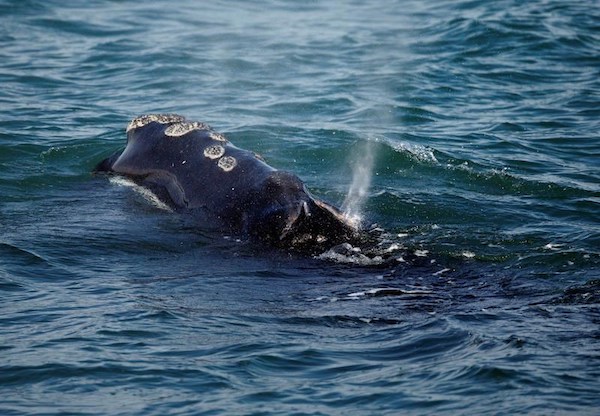 After years of increasingly bad news, there’s a glimmer of hope for the beleaguered North Atlantic right whale.

There are estimated to be fewer than 420 of the endangered mammals left, and their ranks have been decimated as deaths far outpaced live births — there were no births at all during last winter’s calving season.

But researchers have reported seeing seven right whale calves so far this winter off the southern U.S. coast, where the mammals spend their winters before coming north to Canada as temperatures warm.

“Last year was dismal with zero, and the year before that, there were five. However when you look at the average number of calves produced in any given year for the last 10 years it has been just under 17 mom-calf pairs. Although we’re at seven, we’re not at the average level yet,” she said.

The right whale is one of the largest mammals in the sea, and among the most imperilled.

Populations have only slightly rebounded from the whaling era, when the blubber-rich baleen whale nearly became extinct.

She said they hope to see more calves between now and the end of the calving season, around mid-April.

“Keep in mind we’re on the tail end of an unusual mortality event where we had 18 right whales that died in just a few short years. Seven doesn’t make up that number, so we have a ways to go yet,” she said in an interview from Fernandina Beach, Fla.

Zoodsma said healthy females have a calf every three or four years, but recently that has dropped to an average of every 10 years.

She said it’s believed a number of factors are to blame, including the shifting location of food sources, and stresses imposed by fishing gear and large vessels.

“If the females are not getting enough to eat they will not be reproducing,” she said.

She said the number of new calves may be an indication of the supply of zooplankton in the Gulf of St. Lawrence.

“It does give us some promise that the food supply is getting better than it was. As well, there were a lot of social interactions that were observed in the Gulf of St. Lawrence last summer, so that bodes well for next year,” Murison said.

“I’m hoping that we’re on the upturn now and will be looking at more calves.”

The best year on record for calves was 2008-2009, when 39 were spotted, and Zoodsma said they’d love to see numbers like that again.

Right whales typically migrate from the North Atlantic to give birth off the coasts of Georgia and Florida from December through March.

They then head back north to feed off Canada’s East Coast during the summer months.

In 2017, 12 North Atlantic right whales were found dead in the Gulf of St. Lawrence.

Necropsies on seven of those whales found four died from trauma consistent with vessel collisions while two deaths were the result of entanglement in fishing gear.

The Department of Fisheries and Oceans recently announced rules for 2019 — building upon rules in place in the Gulf last year, when none of the endangered mammals were found dead in Canadian waters.

Beginning April 28, the government will reintroduce mandatory speed restrictions for vessels 20 metres or longer when travelling in the western Gulf.

Ships will continue to be allowed to travel at safe operational speeds in parts of two shipping lanes north and south of Anticosti Island, when no whales are in the area.

But the area with mandatory speed restrictions will be adjusted this year to reflect data on right whale sightings and to minimize the impact on the cruise chip and shipping industries.

Ottawa is also reducing by half the protection area for the season-long closure to the snow crab and lobster fisheries, to reflect where 90 per cent of right whales were spotted last year during prime fishing season.

The United States government also extended the duration of a protected area off of Massachusetts to the middle of February to try to keep the right whales safe.