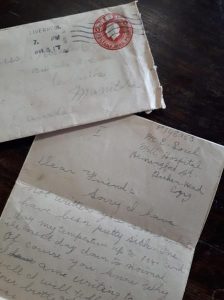 An old letter is seen in this undated handout photo. (THE CANADIAN PRESS/HO, Amanda Kehler)

WINNIPEG — A Manitoba antique store owner who found a letter written by a First World War soldier to the sister of a man who saved his life on a battlefield has contacted some of the relatives.

In the letter written in 1917, a soldier named Earl Sorel tells his friend’s sister about her brother’s death at the Battle of Vimy Ridge.

Sorel says he was wounded in an artillery barrage and his friend dragged him to the safety of a shell hole.

That soldier, Gordon Rochfort, died later during the battle.

Amanda Kehler says at first she simply wanted to return the letter, but now she and the men’s relatives agree it should be shared with others.

Kehler says she is working with Veterans Affairs, Parks Canada and the military to have the letter displayed at the Canadian National Vimy Memorial in France.

She says she has contacted two of Sorel’s extended family.

“They’re extremely happy about their ancestor’s history being remembered,” she told CJOB in an interview.

Kehler says she also found some of Rochfort’s relatives.

“I spoke with the family, and we’re sort of all in agreement that it should be preserved and archived and shown to the public.”

Kehler found the letter in a box of old papers she bought for $1.

In the letter, Sorel shares with Rochfort’s sister what happen on April 9, 1917.

“The barrage was like a thunderstorm and we were trotting at a good pace. We had gone about 1,200 yards and then ‘Bang!’ I felt a sharp burn in my back and left arm,” the letter said. “The next thing I remember was (Gordon) pulling me in a shell hole and he told me to stay there.”

It went on to say: “He died a hero, along with many others that day.”

Sorel was originally from Selkirk, Man.