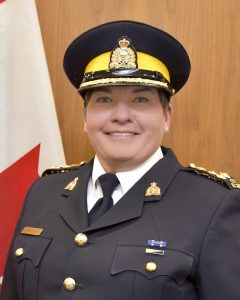 WINNIPEG — Manitoba RCMP has named Assistant Commissioner Jane MacLatchy as the new commanding officer of the RCMP in the province.

MacLatchy is a Nova Scotia native with an extensive policing career dating back to 1988.

MacLatchy is married and a grandmother to a young grandson. She’s also the owner of three rescue dogs and enjoys riding and training horses in her spare time, as well as camping.

She takes over for Assistant Commissioner Scott Kolody, who retired January 28 after 34 years of service.