By Aly Thomson, The Canadian Press 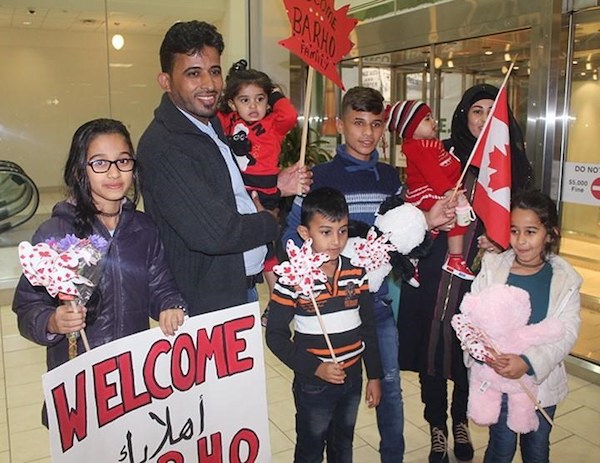 Members of the Barho family are shown upon arrival in Canada on Sept. 29 2017, at the Halifax airport in a handout photo. (THE CANADIAN PRESS/Enfield Weekly Press-Pat Healey)

HALIFAX — The funeral for seven Syrian children who died in a fast-moving Halifax house fire will be held on Saturday, with an open invitation to the community that has rallied around the family.

A Facebook post from the Ummah Mosque in Halifax said services for the Barho children will begin at 1:30 p.m. at the Cunard Centre on Halifax’s waterfront, and will run until 3:15 p.m.

“The funeral proceedings will follow in the Islamic traditions and is open to people of all faiths and members of the public,” the post said, adding that funeral attire is appropriate.

Deputy Mayor Tony Mancini said after the traditional portion of the ceremony, there will be words from community members.

“They want to follow their traditions but at the same time, the outpouring of support and love has been remarkable, and they want to allow those who wish to participate to be with them,” said Mancini in a phone interview Friday.

Following the funeral service, there will be a burial at a Muslim cemetery in Hammonds Plains.

The cause of the fire remains unclear.

The scale of the tragedy for the young Syrian family who arrived in Nova Scotia in September 2017 as refugees has struck a chord with Canadians.

A GoFundMe campaign had raised more than $514,000 by Friday afternoon, with a $1-million goal.

Multiple businesses were donating proceeds of their sales to the family.

A popular Halifax shop, Vandal Doughnuts, said some people waited in line for more than an hour in a snowstorm to buy doughnuts on Thursday, raising $5,025.

The Barho family lived in Elmsdale, a 30-minute drive north of Halifax, when they first arrived in Nova Scotia and were embraced by residents there.

Coun. Stephen King, who represents Elmsdale-Belnan, said there will be a non-denominational vigil for the family at 7 p.m. Friday at Riverview United Church.

“They were living right in historic centre of Elmsdale. It’s where everyone passes through and everything is happening — like our July 1st parade and tree-lighting ceremonies,” said King.

“The neighbours around them really embraced the children.”

King said they lived on a short street with about half-a-dozen houses, in an older home known locally as Miller House.

“The kids would got back and forth to those houses every day — there was interaction every day,” said King.

“You’d see the child out by the house, or by the church and the little general store — or they would be walking up to the mall. Everybody got to know them… They seemed to be a real good fit with the community.”

He said even the younger children seemed to be picking up English as a second language rather quickly.

“I was always impressed with the oldest boy. He seemed to be mature beyond his years. Of course, you never know what they are shouldering.”

Kawthar Barho, whose husband Ebraheim was in a medically induced coma to recover from extensive burns, has told local politicians and religious leaders in Halifax that she wants to be reunited with family members living overseas because she has no other relatives in Canada.

The prime minister, in Halifax on Thursday for a funding announcement, said Halifax MP Andy Fillmore had already contacted Immigration Minister Ahmed Hussen about expediting the immigration process for some family members.

Fillmore said immigration applications were being reviewed Thursday. His office did not immediately return a request for comment Friday.

The Barhos had moved to the Halifax suburb of Spryfield to take advantage of language training and other immigrant services. They had planned to return to Elmsdale next month.

— With files from Michael MacDonald.