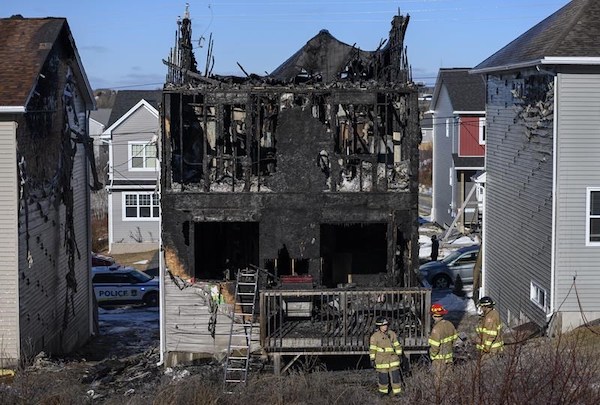 Firefighters investigate following a house fire in the Spryfield community in Halifax on Tuesday, February 19, 2019. Experts say the deaths of the seven Barho children in a ferocious Halifax house fire last week could lead to new fire safety measures and changes to the country’s building code. (THE CANADIAN PRESS/Darren Calabrese)

HALIFAX — Experts say the deaths of the seven Barho children in a ferocious Halifax house fire last week could lead to new fire safety measures and changes to the country’s building code.

“I think we’re going to learn from this tragedy and you may actually end up seeing some changes coming in the codes as a result of this,” Phil Rizcallah, director for construction research and development with the National Research Council of Canada, said in an interview Monday.

The federal research organization plans to study the coroner’s report and the fire marshal’s report in detail, he said.

Fire officials are continuing to investigate the fast-moving blaze that left only a charred husk of the Barho home, located in a newly built residential subdivision in Halifax.

Many eyewitnesses described the fire as spreading very quickly through the home.

Halifax Fire Deputy Chief Dave Meldrum has declined to speak about the nature of the fire, but he told reporters last week that “new homes are built with light-weight construction. Once fire barriers are penetrated, rapid fire spread is possible in new construction.”

He said most new homes are now built using engineered wood joists or trusses and steel structural sections and then covered by gypsum board or drywall as protection.

“If the gypsum board is gone, everything behind it is gone in no time,” Zalok said, describing how quickly fires can spread in new homes. “We should go back to building with solid wood.”

He added that codes and standards provide minimum fire protection requirements, and that dedicated developers and home owners should go beyond the minimums “knowing they are protecting their lives and properties.”

Mike Holmes, one of Canada’s leading contractors and a well-known television host, said Monday new homes should be built with fire-resistant products to slow down the spread of a fire.

Holmes said older homes were built with hardwoods and older lumber with tighter grains that are more resistant to “flame spread.” He said the young wood used in new homes is more flammable.

Holmes said building codes are a minimum standard, and that homeowners could demand higher standards, including fire-resistant products, from builders.

“We tend to not pay attention to things until there is a catastrophe,” he said. “This should be a wake up call that we need to take things more seriously.”

Holmes said without the use of more fire-resistant materials and products, sprinkler systems may be an option for some homeowners.

“I don’t want to introduce more plumbing in a home that I’m trying to keep dry,” he said.

“However, if we’re not going to use fire-resistant products maybe we should enforce a sprinkler system … to build a home that just won’t burn like that house did.”

Rizcallah said the Canadian Commission on Building and Fire Codes examined residential sprinklers about a year ago.

“Sprinklers will reduce the risk of injury and fire loss and potentially fatalities in homes based on what we know and what we’ve seen,” he said.

Still, he said the commission found there wasn’t enough evidence to mandate sprinklers in all new homes, though sprinkler standards were created.

The first national building code was issued in 1940, and Rizcallah said it’s updated every five years based on the latest research and technology.

Although he said homes are significantly safer than they were 20 years ago, he said homeowners should take precautions, including having interconnected smoke alarms on every floor of a house, limiting combustibles, and having a fire exit plan.

Rizcallah said the latest building code requires smoke alarms in every bedroom and on every level of a home.

The Barho family arrived in Canada 18 months ago as Syrian refugees.