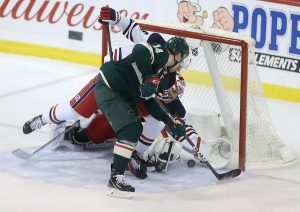 WINNIPEG — Joel Eriksson Ek didn’t need a review or a challenge to know he scored the game-winning goal on Tuesday.

Both those examinations happened, but the Minnesota forward still had his goal count with 1:01 remaining in the third period to lift the Wild to a 3-2 victory over the Winnipeg Jets.

Jason Zucker had scored 26 seconds earlier to tie it up and the comeback delivered a fourth straight victory for Minnesota.

“Yeah, it crossed the line and I knew it was in,” Eriksson Ek said of the loose puck. “It was nice it was not disallowed this time.”

The Swedish forward had a goal waved off because of his own offside when the Wild beat the New York Rangers 4-1 on Feb. 21 to start the current run.

This time, his goal was reviewed to see if the puck had crossed the line and then the Jets challenged for goaltender interference on Connor Hellebuyck.

Zucker had beat a screened Hellebuyck at 18:33 on a 6-on-4 power play with Devan Dubnyk out of the net. Brad Hunt had the other goal for Minnesota and Ryan Donato contributed a pair of assists.

Dubnyk made 30 saves for the Wild (31-27-6), who have also won all four games against Winnipeg this season.

“They beat us four out of five last year when it counted so maybe it’s just how things work, but we’ve gotten lucky against them,” Wild head coach Bruce Boudreau said.

Patrik Laine scored once and added an assist and Mark Scheifele also had a goal for the Jets, who are 1-4-1 in their past six games.

“It’s obviously not a good finish,” Laine said. “That can’t happen. I think we played some good hockey until the tying goal. After that, we let it go for a bit, they scored two.”

Following a pre-game ceremony to induct Lars-Erik Sjoberg and the late Ab McDonald into the Jets Hall of Fame, Scheifele kept the fans at Bell MTS Place cheering.

The centre scored on the power play at 8:53 of the opening period, his first point in six games. Laine had the primary assist.

Hunt’s high shot past a screened Hellebuyck tied the game at 11:50 of the second, but 14 seconds later defenceman Ben Chiarot’s shot went off Laine for his 29th goal of the season.

Laine stretched his point streak to four games with four goals and two assists. He has goals in his past three games, coinciding with him playing on a line with Scheifele and Blake Wheeler. Laine hadn’t scored in 15 straight games before the change.

“They (Minnesota) didn’t have much at all,” Wheeler said. “It’s hard for us right now. We spend a lot of the game, not necessarily playing well, but doing enough to keep them kind of out of the danger zones and the wheels fall off at the end.”

Wheeler and Kyle Connor also recorded an assist each, extending their point streaks to four games with five points apiece.

Donato, acquired in a trade with Boston on Feb. 20, has points in each of his first four games with the team (one goal, five assists).

Boudreau noted his players matched the pace of the fast Jets.

“It gives you confidence that you can play with the big boys a little bit,” he said.

It was the first game Winnipeg was without top-pair defenceman Josh Morrissey, who’s out until at least early April with an upper-body injury after being hit into the boards in last Sunday’s 4-1 loss to Arizona.

It was the Jets debut for centre Kevin Hayes, who was acquired from the New York Rangers. He played between left-winger Mathieu Perreault and Nikolaj Ehlers. Winnipeg also added forwards Matt Hendricks from the Minnesota Wild and Par Lindholm from the Toronto Maple Leafs, who were scratches.

Kevin Fiala played his first game for Minnesota after being traded from Nashville. He lined up with centre Luke Kunin and left-winger Zach Parise.