Home » The Canadian Press » Wilson-Raybould Says She Was Pushed, Got Veiled Threats on SNC-Lavalin

Wilson-Raybould Says She Was Pushed, Got Veiled Threats on SNC-Lavalin 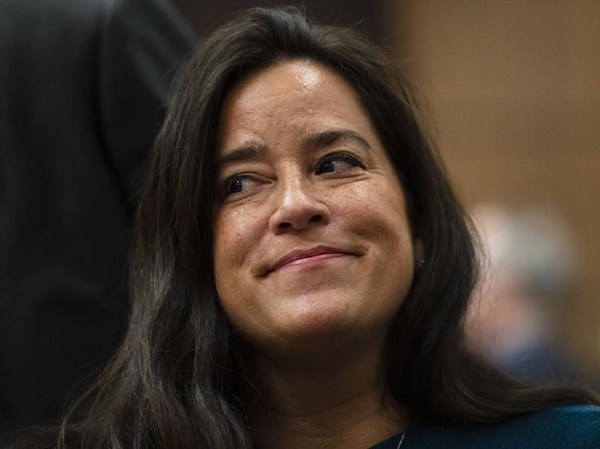 Jody Wilson-Raybould appears at the House of Commons Justice Committee on Parliament Hill in Ottawa on Wednesday, Feb. 27, 2019. (THE CANADIAN PRESS/Sean Kilpatrick)

And she says she believes she was shuffled out of the prestigious justice portfolio to veterans affairs in January because she refused to give in to it.

Wilson-Raybould made the stunning and detailed accusations in testimony Wednesday before the House of Commons justice committee, breaking three weeks of silence on the affair that has rocked the government, prompting her resignation from cabinet and the departure of Trudeau’s most trusted adviser.

Wilson-Raybould told the committee she was “hounded” to end the prosecution for months after the director of public prosecutions, Kathleen Roussel, had rejected the idea of negotiating a remediation agreement with SNC-Lavalin and long after she had unequivocally declared that she would not direct Roussel to reverse her decision.

“For a period of approximately four months, between September and December of 2018, I experienced a consistent and sustained effort by many people within the government to seek to politically interfere in the exercise of prosecutorial discretion in my role as the attorney general of Canada,” she told the committee.

Nevertheless, Wilson-Raybould said she didn’t consider resigning at the time and didn’t directly raise her concerns with Trudeau after Sept. 17, when she first informed him that she believed it would be inappropriate for her to intervene in the SNC-Lavalin matter.

She didn’t speak directly to Trudeau about SNC-Lavalin again until Jan. 7, when he informed her he was about to move her out of the justice portfolio and she told him she believed the move was the result of her refusal to intervene in the prosecution. She accepted a move to veterans affairs on Jan. 14 and did not resign from cabinet until Feb. 11, five days after an anonymously sourced allegation that she’d been improperly pressured first surfaced in the Globe and Mail.

The pressure campaign culminated on Dec. 19, she said, with what she deemed three “veiled threats” that she could lose her job from the clerk of the Privy Council, Michael Wernick, who last week told the committee he believes there was no improper pressure applied to Wilson-Raybould.

According to Wilson-Raybould, Wernick told her that Trudeau wanted to know why SNC-Lavalin was not being offered a remediation agreement, a kind of plea bargain that would allow the company to avoid the potentially crippling impact of a criminal conviction. He told her that the prime minister was “going to find a way to get it done one way or the other” and that it was not good for the attorney general to be “at loggerheads” with the prime minister.

But Wernick wasn’t the only one accused of pressuring her. Wilson-Raybould said pressure was exerted on her or her staff by 10 other people in the Prime Minister’s Office and the finance minister’s office through approximately 10 phone calls, 10 meetings and numerous emails and text messages. They repeatedly raised concerns about the risks to SNC-Lavalin’s viability if it were convicted of corruption and fraud in relation to work it sought in Libya.

Moreover, she said they were worried that the company might decide to move its operations out of Quebec, affecting last fall’s provincial election in Quebec and potentially hurting more Liberals in the province, including Trudeau himself, in the coming federal election this fall.

She said she was told repeatedly the decision was up to her, but attempts to talk her into a remediation agreement were relentless.