Home » The Canadian Press » My Moose is Bigger Than Your Moose: Norwegian Politician to Visit Saskatchewan

My Moose is Bigger Than Your Moose: Norwegian Politician to Visit Saskatchewan 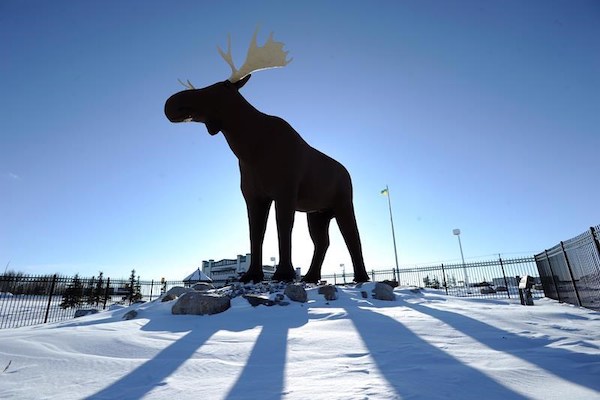 Mac the Moose, pictured in Moose Jaw, Sask., on Tuesday, Feb. 25, 2019, is competing with another moose statue in Stor-Elvdal, Norway, over which hooved ungulate stands higher. (THE CANADIAN PRESS/Mark Taylor)

REGINA — The deputy mayor of a Norwegian municipality with a sculpture that set off a mighty moose match with a Saskatchewan prairie city is to arrive for a visit later this week.

Part of her mission will be to attend her first hockey game.

“It’s cool that my debut is in Canada — the hockey nation,” Linda Otnes Henriksen, whose flight is to land in Regina on Thursday night, told The Canadian Press.

Henriksen’s visit has been dubbed an “international moose summit” by the city of Moose Jaw. But Henriksen of Stor-Elvdal characterizes the trip as a chance to meet the city’s mayor and residents after weeks of back-and-forth headlines.

After decades of believing a highway attraction named Mac was the biggest moose in the world, Moose Jaw was toppled from top spot when it was revealed Stor-Elvdal had a silvery moose sculpture that was taller by 30 centimetres.

Henriksen said she decided to send a message to Moose Jaw’s mayor asking if she could pay a visit. Fraser Tolmie happily agreed.

“We thought … why not? We should get together and meet,” she said.

“Since both moose have really been placed on the map … a friendship would be good for both of us.”

In a statement posted on the city’s website, Tolmie welcomes Henriksen and notes the possibility of building economic or tourism partnerships.

Henriksen believes the ongoing moose saga could open the door to a closer relationship.

“We are trying to do our best in order to make tourists come here,” she said of Stor-Elvldal, home to about 2,500 people, in east-central Norway.

“I know that Moose Jaw and Mac the Moose and the Canadians are doing the same thing.”

Her municipality is paying her way to Moose Jaw. It’s her first trip to Canada.

She always imagined her first voyage would be to Vancouver or Toronto, but Henriksen has been reading online and says she is excited to experience a prairie city and to see Mac in person.

“I know it’s the friendly city,” she said of Moose Jaw. “It’s very flat there.”

Henriksen’s almost week-long stay will include a tour of Moose Jaw and its historic tunnels, a visit to a school and a Moose Jaw Warriors Western Hockey League game.

It’s been very cold in Saskatchewan and daytime highs during her visit are forecast to range between -15 C and -18 C. Overnights are to dip into the -20s.

“I’m from Norway. It’s like winter here almost all year … so I’m not afraid of the temperature.”