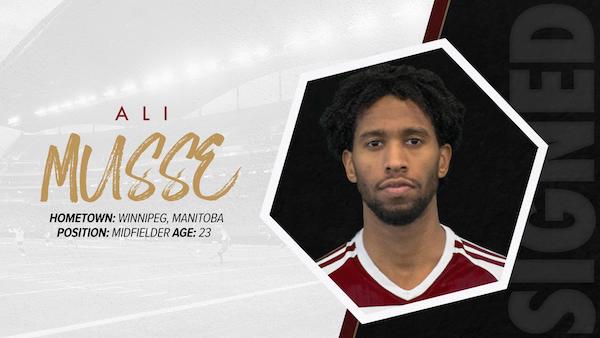 Valour FC announced the 23-year-old’s signing Thursday, welcoming him into the fold for the club’s inaugural Canadian Premier League season.

“We are excited to bring Ali back to Manitoba… he is a lad I have worked with since the age of 10 and followed his career as it has progressed through the WSA, the Whitecaps, and last season where he was the standout player in the PDL playoffs for Calgary,” said Valour FC head coach and GM Rob Gale.

“We are delighted he has chosen to play for Valour FC and come back home.”

Musse comes from Calgary Foothills FC of the Premier Development League (PDL) where he has played since 2016. In his first season with Calgary, Musse scored five game-winning goals and helped the team advance to the PDL Championship final. In 2018, the midfielder lead Calgary to victory in the PDL Championship Final over Reading United. In that match, Musse scored two goals in extra time to help seal the win.

Valour FC begins its season at Westhills Stadium against Pacific FC on Wednesday, May 1. The team’s home opener is set for Saturday, May 4 at 5 p.m. against the visiting FC Edmonton.