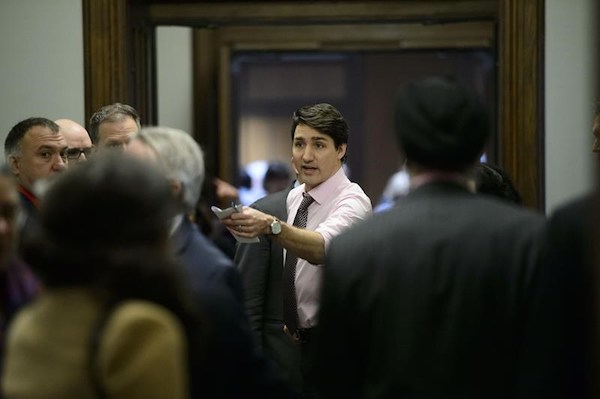 OTTAWA — Prime Minister Justin Trudeau ended a stormy week for his government by making a few minor changes to his cabinet to fill the void left by the resignation of Jody Wilson-Raybould.

Longtime MP Lawrence MacAulay was sworn in as veterans-affairs minister — a post briefly held by Wilson-Raybould before she resigned from cabinet last month in the wake of the ongoing SNC-Lavalin controversy.

Bibeau is now responsible for selling recently signed trade agreements to Quebec dairy farmers that will reduce the protective effect of supply management in their industry. She said she’s eager to meet with them.

“It’s a huge privilege — I come from a rural riding, a dairy riding, in fact, in the south of Quebec, so I’m very close to the producers in Quebec,” she said outside Rideau Hall after being sworn in as the first female federal agriculture minister.

Monsef said she is looking forward to working especially on moving forward with the feminist international development policy Bibeau introduced.

“I’m going to continue to ensure that women are the heart of the work that we do. Because when women do well, whether it’s abroad or here in Canada, their families do better and everyone benefits.”

Like Wilson-Raybould before him, MacAulay said he didn’t see the move to Veterans Affairs as a demotion.

“To have the honour to represent the people who preserve peace and democracy for us worldwide, that’s a long piece from a demotion,” he said.

Unusually, the official headquarters for the Department of Veterans Affairs is outside the capital region — it’s in Charlottetown, P.E.I. which is MacAulay’s home province.

Wilson-Raybould, who was moved from the justice portfolio to veterans affairs in the last federal cabinet shuffle in mid-January, resigned her post Feb. 12.

Trudeau has denied the SNC-Lavalin affair had anything to do with Wilson-Raybould’s move, saying she would still be justice minister had former Treasury Board president Scott Brison not suddenly decided to leave politics.

Friday’s shuffle came at the end of a difficult week for the Trudeau government, which saw Wilson-Raybould deliver bombshell testimony to the Commons justice committee.

She told the committee she faced relentless, inappropriate pressure and “veiled threats” from Trudeau and several top aides, the Privy Council Office and the office of Finance Minister Bill Morneau, asking her to politically interfere in the criminal prosecution of Montreal engineering giant SNC-Lavalin. And she said she believes she was shuffled out of the prestigious justice post because she refused.

Trudeau’s former top adviser, Gerry Butts — who resigned in an effort to defend the prime minister and the PMO’s actions — is expected to testify before the committee next week.

The prime minister faced a barrage of questions in various public appearances outside of Ottawa on Wilson-Raybould’s allegations. On Friday, Trudeau did not take questions from reporters — a departure from past cabinet shuffle events at Rideau Hall.

The Commons is not scheduled to sit the next two weeks, but Conservative Leader Andrew Scheer and NDP Leader Jagmeet Singh sent Trudeau a joint letter Friday asking it be recalled so the prime minister can be held to account. They noted Trudeau has not been in the Commons for question period since Wilson-Raybould testified late Wednesday afternoon.

Five former federal and provincial attorneys general — four Conservatives and one New Democrat — sent a joint letter to RCMP Commissioner Brenda Lucki to urge an investigation into two possible criminal offences arising out of Wilson-Raybould’s testimony: obstruction of justice and conduct intended to provoke fear in the attorney general. That follows a letter Scheer sent Lucki on Thursday, asking her to initiate an investigation.

MacAulay, Bibeau and Monsef told reporters they will support Trudeau’s decision when he determines whether Wilson-Raybould stays in the Liberal caucus after her public criticisms of the way she was treated by Trudeau and his staff.

“She’s a very well-respected lady,” MacAulay said of Wilson-Raybould, “but what to do about her place in their party is up to the prime minister.”