By Darrin Bauming, The Canadian Press 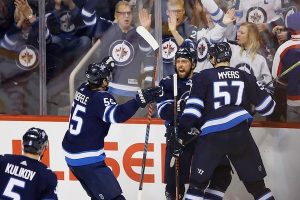 Hayes had an empty-net goal and added two assists to help Winnipeg erase a two-goal deficit and beat the Nashville Predators 5-3 on Friday night.

“It wasn’t the nicest goal, but I’ll take it,” said Hayes. “We’re in that final stretch here where we need to figure out what kind of team we’re going to be going into the playoffs. And going down 2-0 and battling back, I thought we (dealt with) some pretty good adversity there.”

Hayes went pointless in his Jets debut on Tuesday against Minnesota. He was acquired at Monday’s trade deadline from the New York Rangers in exchange for a 2019 first-round pick, forward Brendan Lemieux, and a conditional 2022 draft pick.

Hayes said the positivity around his new team is contagious.

“We go down two and everyone’s still positive on the bench,” he said. “It shows you the type of team these guys are.”

Jets captain Blake Wheeler said Hayes is the type of individual who makes players around him better even though he’s still getting used to a new team.

“I think you could see today, he was talking a little bit more, feeling a bit more comfortable,” Wheeler said. “So it was great to see him have a good night.”

Wheeler and Mark Schiefele also had a goal and tacked on two helpers apiece for the Jets (38-22-4). Kyle Connor and Tyler Myers had the other goals for Winnipeg.

The Jets moved ahead of Nashville (37-25-5) and atop the Central Division standings with the victory.

“We went down and took a punch and missed, and they came back and put it in the net,” said Predators head coach Peter Laviolette.

Laurent Brossoit stopped 34-of-37 shots, improving his record to 11-4-2 this season. Pekka Rinne made 27 saves in defeat.

Brossoit started in place of Jets No. 1 Connor Hellebuyck who came down with the flu.

“These games especially are the ones you really want to get up for,” said Brossoit. “You never want to see a teammate sick, but it gave me an opportunity and it was just really nice to get back into the win column. I thought everyone came to play tonight.”

With the win, the Jets avoided losing three consecutive games in regulation.

Arvidsson opened the scoring in the first period before Subban extended the lead on the power play with a point shot through traffic.

Winnipeg struck twice in a span of 2:33 late in the second period, tying the game 2-2.

Scheifele’s backhand fooled Rinne on the power play for his team-leading 32nd goal of the season, tying a career-high for the 25-year-old. Kyle Connor found the equalizer — his 25th of the season — with 1:39 remaining in the second period.

The Jets’ power play went 1-for-4 while Nashville went 1-for-3 with the man advantage.

The Jets now venture out on a four-game road trip beginning Sunday in Columbus before visits to Tampa Bay, Carolina, and Washington. The Predators wrap a quick two-game road trip Sunday in Minnesota before completing the home-and-home with the Wild two days later back in Nashville.

The Jets and Predators meet again in Winnipeg on March 23.