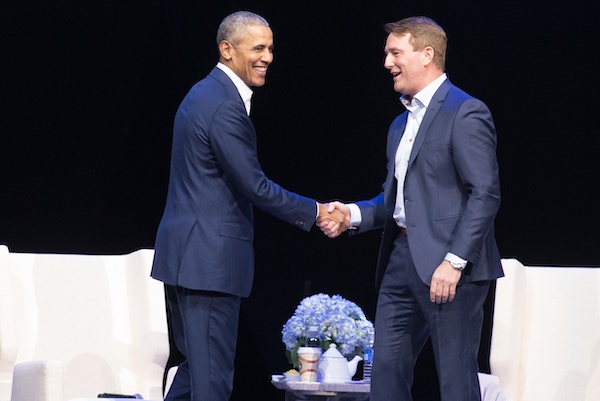 WINNIPEG — The former president of the United States sure knew how to warm up a crowd.

After receiving a standing ovation from 13,500 adoring fans at Bell MTS Centre on Monday night, Barack Obama laughed about how he got slapped in the face by the wind when stepping off the plane on his first visit to Winnipeg.

“I got homesick,” said Obama, whose political career was established in Chicago. “It’s good to be in Winnipeg. People couldn’t have been more gracious since I got here (Monday).

“I got to meet the owner (Mark Chipman) of the (NHL) Jets, whose team is in first place. My Blackhawks are in last place. But their captain (Jonathan Toews) is from Winnipeg and I thank you for that.”

His address, “A Conversation with Barack Obama,” came in the form of an on-stage interview with Mike Burns, the CEO of the Princess Margaret Cancer Foundation in Toronto.

Obama, 57, was the first African American voted in as the USA’s 44th president in a landslide victory. The Democrat served two terms (2009-17) without any major controversies.

Burns asked Obama if he would consider running for Prime Minister in Canada.

If I ran for as much as dog catcher, my marriage would be over, Michelle would never go for that,” he joked. “(My family) is doing fabulous. I shine in their reflection.

“Michelle, you may have heard, wrote a book. It’s doing OK.” 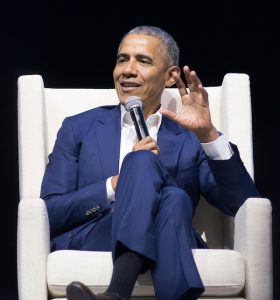 “We raised two young women who are very kind and nice and who want to make a contribution, and I’m really, really proud of them,” he said.

The controversial Donald Trump, a Republican, was elected to replace Obama. While Obama never mentioned Trump by name, nor was he asked about him, he did make some rather sly references to him.

For example, Obama was asked about what went into forming his team of supporters when he first got to the Oval Office in the White House.

“No. 1 was integrity — people being there for the right reasons,” Obama said. “I established how we were going to do things and how we don’t do things. You had to believe in what we were doing and not because there was something that you wanted.”

“No. 2 — not being afraid of being of having people who are smarter than you in the room,” Obama said. “You can’t be an expert on everything. No. 3 — diversity. If you have no women in your meetings, you’re probably not going to have a very good organization. And if you can’t have some racial diversity, you’re going to miss the boat and be in for some surprises.”

“Ultimately, change is going to come from the people, not politicians,” said the winner of the Nobel Peace Prize in 2009.

Obama then left to another standing ovation.