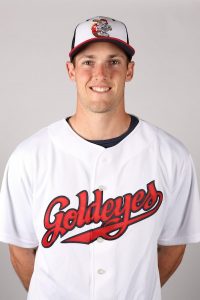 The Winnipeg Goldeyes on Wednesday announced the re-signing of third baseman Wes Darvill to the team’s roster.

It’s Darvill’s third season with the Fish, where he played in 2016 and 2017 before having his contract purchased by Los Angeles Dodgers.

The Richmond, B.C. native, 27, appeared in 58 games across three levels of the Dodgers’ organization, reaching Triple-A for the first time in his career with the Pacific Coast League’s Oklahoma City Dodgers.

“I’m very excited to have Wes back for 2019!” said Goldeyes’ manager Rick Forney. “Wes is a very good player both offensively and defensively, and sets a great example to the new players as to how we like the game played in Winnipeg.”

In a separate transaction, the Goldeyes traded infielder Tucker Nathans to the Can-Am League’s les Aigles de Trois-Rivieres in exchange for cash. Nathans hit .288 with 12 home runs and 33 RBI in 68 games for the Goldeyes last season.