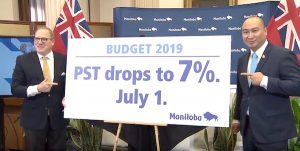 Finance Minister Scott Fielding (left) reveals the Manitoba government will cut the PST to 7% as of July 1. (MANITOBA GOVERNMENT / YOUTUBE)

WINNIPEG — Manitoba’s Progressive Conservative government included a long-promised provincial sales tax cut in its annual budget Thursday — a move that could pave the way for an early election.

The budget calls for the tax to drop to seven per cent from eight per cent as of July 1, which would save the average household $350 a year.

“We think that Manitobans deserve a break and … this is something we committed to doing,” said Finance Minister Scott Fielding.

“It was a major platform item that we had and so we’re very proud of this.”

The tax cut was a cornerstone of the Tory election campaign in 2016, three years after the former NDP government had raised it.

PC Leader Brian Pallister promised the cut would come before the next election scheduled for Oct. 6, 2020, and in recent months he hasn’t ruled out calling an earlier vote.

When pressed on election timing Thursday, he remained coy.

“Both the media and the opposition leaders have done their share of predicting an election date, so I don’t need to add to it,” Pallister said.

It keeps a tight rein on spending increases. There are hikes of less than one per cent in health and education operating costs, and cuts to some infrastructure spending.

Tuition fees at universities will continue to increase well above the rate of inflation under a formula the Tories implemented two years ago.

The tax cut puts opposition parties in a tough spot, said political analyst Paul Thomas of the University of Manitoba. They will have to decide whether to vote against the potentially popular budget, which would give the Tories ammunition during an election campaign.

“It’s a good way to pin the opposition parties down and force them to boast and confess what they would do differently,” said Thomas.

Both opposition party leaders said they will vote against the budget.

NDP Leader Wab Kinew said the cut comes at a time when the government has forced hospitals, school boards and other organizations to cut services.

The government is predicting a deficit of $360 million, $161 million smaller than the deficit in the current fiscal year. Fielding said the Tories are on track to meet their promise to balance the budget by the end of a second term.

Manitoba’s finances have been helped by successive years of major increases in federal transfer payments. This year, transfers will jump by more than $300 million, mostly in equalization payments designed to help poorer provinces offer services similar to richer ones.