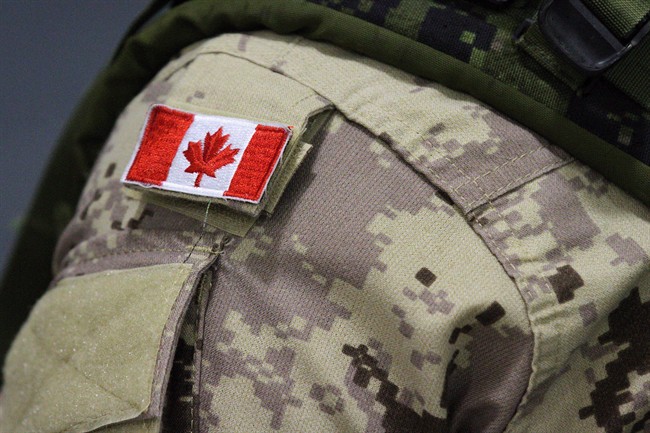 A Canadian flag patch is shown on a soldier’s shoulder in Trenton, Ont., on Thursday, Oct. 16, 2014. (THE CANADIAN PRESS/Lars Hagberg)

OTTAWA — Despite repeated promises to fix the mess, the number of veterans waiting to find out whether they qualify for disability benefits has continued to grow, and there are fears the turmoil will only worsen in the coming weeks.

New figures from Veterans Affairs Canada show nearly 40,000 veterans were waiting at the end of November to hear whether their applications for financial assistance would be approved — 11,000 more than the previous year.

And more than one-third of the total had been in the queue longer than 16 weeks, which was also an increase and a sign that veterans are waiting ever longer to find out whether they are entitled to assistance.

That is despite the Trudeau government’s having moved to hire more frontline staff and committing $42 million over two years in last year’s budget to clear up the backlog, which has been a source of concern for years.

Revelations about the growing size of the backlog have prompted fresh shock and concern among veterans’ advocates who say long delays add stress and frustration to veterans already suffering from physical and psychological injuries.

And there are fears that the situation will only get worse as Veterans Affairs begins to roll out a new pension plan for disabled veterans next month, which will see staff using a new computer system to process a new package of benefits.

“I’m surprised it’s grown that much,” said Jim Lowther, president of VETS Canada, which supports homeless veterans in communities across the country, adding when it comes to the new pension plan: “No one really knows how it going to unfold.”

The government is blaming the explosion in waiting files on a 60-per-cent increase in the number of new applications over the past year that came with the introduction of several new benefits, resulting in demand outstripping the department’s ability to keep up.

At the same time, Veterans Affairs Canada’s head of operations, Michel Doiron, said in an interview Thursday that the department has taken time to put the new money to use.

“Staffing somebody in the public service is not done overnight, and here you’re looking at nurses and you’re looking at doctors,” he said. “So it takes some time to get there…. I’m not seeing the benefit of the surge up until probably now.”

As for the new pension system, Doiron acknowledged the uncertainties of implementing a new government computer system, particularly when many federal public servants are still suffering under the buggy Phoenix pay system, and that “April will be a difficult month.”

But the new system has been well-tested, contingency plans are ready to ensure veterans aren’t unduly affected and the change isn’t nearly as complex as those demanded by Phoenix, he said. It also incorporates new technology that should speed processing of applications.

Many advocates as well as the union representing Veterans Affairs workers have long demanded the government hire more staff for the department, which was hit with deep cuts and layoffs under the Stephen Harper government.

“With all of these changes, we feel that there is not enough staff,” said Virginia Vaillancourt, national president of the Union of Veterans’ Affairs Employees, who said some staff have been under the gun to work overtime in recent months.

“There are huge concerns not only for our veterans but also for our employees with this whole aspect of doing more with less.”

“Over the last three years we have improved the benefits and services for veterans and their families,” he said. “But we know we need to continue to improve in how we deliver those services.”

Doiron played down the importance of more staff, but didn’t rule it out, saying officials are first looking at whether the combination of surge-funding, innovations such as artificial intelligence in processing applications for aid, and other measures will address the problem.

“I actually think the surge funding will help me get over this initial hump and we’re doing that analysis now to say with all this innovative stuff we’re bringing in, do we actually have the right number of people at the end of the surge funding?” he said.

“And we’ve advised central agencies that we may, and I stress may, that we may come back with an ask.”