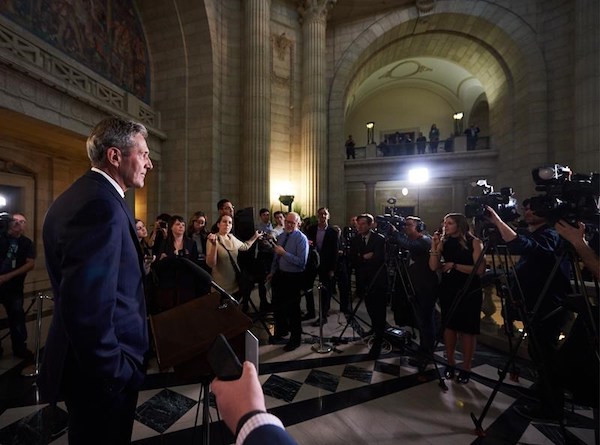 WINNIPEG — The Manitoba government is eliminating a public subsidy for political campaign expenses such as advertising, office rent, transportation and staff wages.

An omnibus budget bill introduced in the legislature would do away with a rebate that reimburses provincial parties and individual candidates 50 per cent of their general campaign expenses. The rebate has been available to any party or candidate that receives at least 10 per cent of the popular vote.

“That’s a subsidy directly to political organizations that does nothing for Manitobans,” Premier Brian Pallister said Friday, adding he considers the subsidy one of the most generous among the provinces.

“Manitobans don’t get 50 per cent back when they have a small business and they buy ads.”

Following the last election campaign in 2016, the Progressive Conservatives and NDP received close to $1 million each under the reimbursement provision, while the Liberals got more than $250,000.

Even with the reimbursements, the Liberals and NDP took more than a year to pay off their campaign debts.

Liberal Leader Dougald Lamont said the change will make it harder for lower-income people to run for office, because they would fear being left with campaign debts they cannot repay.

“This bill tips the playing field even more in favour of people who have money, and frankly, that’s not what democracy is about,” Lamont said.

NDP Leader Wab Kinew said the change will likely be another barrier to women and people in marginalized groups who want to enter politics.

“Some people feel like they don’t have access to the same networks or the same donor pool.”

But Pallister said the change should open the door to more political participation.

Independent candidates and smaller organizations such as the Green Party often don’t get any reimbursements because they fail to reach the required 10 per cent vote minimum. They will no longer be at a disadvantage, he said.

The government is also maintaining a separate, 100 per cent reimbursement specific to the child care and disability-related expenses of candidates.

Pallister eliminated another political subsidy three years ago — an annual taxpayer-funded payment for political parties that was based on how many votes they had received in the previous two elections.