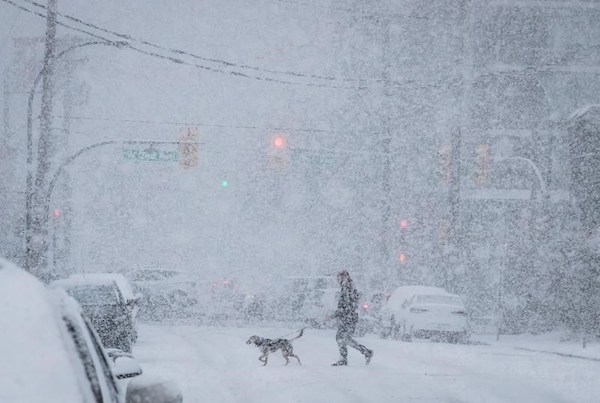 A person walks a dog as heavy snow falls in Vancouver, on February 10, 2019. (THE CANADIAN PRESS/Darryl Dyck)

A weekend bout of late winter snow could make travel tricky in southeastern Manitoba as a Colorado low makes its way into the province.

Areas around Sprague could see the highest amounts of snow as the system pushes northeast toward the Great Lakes.

“Current indications are that Winnipeg will escape the worst of the system, with increasing amounts as you go south and east of the city,” the warning says.

“Travellers should be aware that winter weather bulletins are also in effect for northwestern Ontario, North Dakota, and Minnesota.”

A separate Colorado low on track for next week is expected to have more of an impact on Winnipeg and the Red River Valley, with up to an additional 20 centimetres predicted, according to early forecast models.

Flood forecasters have previously said any late winter precipitation and/or rapid snowmelt could have a significant impact this spring. Manitoba is already forecasting a major flood risk for the Red River Valley with water levels similar to those of 2011 or 2009.