By Morgan Lowrie and Rob Drinkwater, The Canadian Press 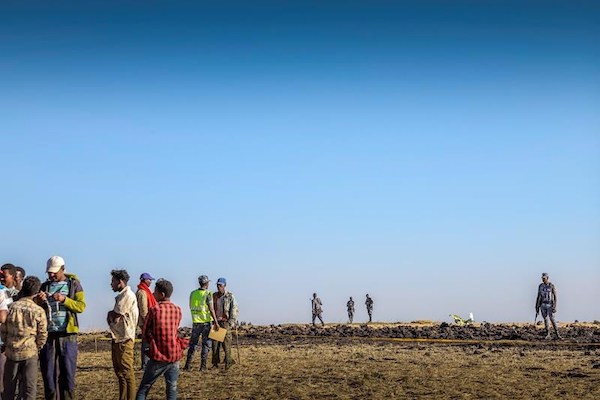 Rescuers search at the scene of an Ethiopian Airlines flight that crashed shortly after takeoff at Hejere near Bishoftu, or Debre Zeit, some 50 kilometres (31 miles) south of Addis Ababa, in Ethiopia Sunday, March 10, 2019. The Ethiopian Airlines flight crashed shortly after takeoff from Ethiopia’s capital on Sunday morning, killing all 157 on board, authorities said, including 18 Canadians. (THE CANADIAN PRESS/AP)

A senior UN official and a New Brunswick forester were among the 18 Canadians who died Sunday when an Ethiopian Airlines plane crashed shortly after takeoff, killing all 157 aboard.

The United Nations High Commission for Refugees said one of its Canadian-born employees was among the victims of the deadly crash of an Ethiopian Airlines plane.

The commission identified the woman as Jessica Hyba, who was working as the organization’s senior external relations officer.

Meanwhile, forestry groups identified Peter DeMarsh of New Brunswick as one of the victims.

The Kenya Forest Service and the Family Forest Nepal Facebook pages both wrote posts offering condolences to the family of DeMarsh, who worked with the International Family Forestry Alliance.

The International Family Forestry Alliance did not immediately return a request for comment Monday.

The Kenya Forest Service post said DeMarsh was en route to Nairobi to attend a workshop on “access to international climate finance for small holder farmers.”

The plane crashed shortly after takeoff Sunday morning, killing all 157 aboard, including 18 Canadians.

An airline official, however, told The Associated Press that the box was partially damaged and that “we will see what we can retrieve from it.”

The official spoke on condition of anonymity for lack of authorization to speak to the media.

It was not clear what caused the Ethiopian Airlines plane to go down in clear weather six minutes after departing Bole Airport in Ethiopia’s capital Addis Ababa on its way to Nairobi, the capital of neighbouring Kenya. The accident was strikingly similar to last year’s crash of a Lion Air jet that plunged into the Java Sea, killing 189 people.

Both crashes involved the Boeing 737 Max 8, and both happened minutes after the jets became airborne. In the wake of Sunday’s crash, Ethiopian Airlines as well as all Chinese airlines have ground their Boeing 737 Max 8 planes indefinitely.

Air Canada said in an email statement Monday that it has operated Boeing 737 Max 8 aircrafts since 2017 and has 24 in its fleet.

“We continue to monitor the situation, and based on current information and recommendations by government safety regulators, including Transport Canada, and the manufacturer, we continue to operate our normal B737 schedule.”

WestJet and Sunwing did not immediately return a request for comment Monday.

A mother and daughter from Edmonton, a renowned Carleton University professor, and an accountant with the City of Calgary were also among the Canadians who died in the crash.

Mohamed Hassan Ali said his sister, Amina Ibrahim Odowaa of Edmonton, and her five-year-old daughter, Sofia Faisal Abdulkadir, were on board the jet that went down six minutes after it took off from the Addis Ababa airport on the way to Nairobi, Kenya.

“(She was) a very nice person, very outgoing, very friendly. Had a lot of friends,” Ali said of his sister, who was travelling to Kenya to visit with relatives.

Benoit-Antoine Bacon, the school’s president and vice-chancellor, described him as a “global thinker,” and a “towering figure in African and post-colonial scholarship.”

Media reports indicated that Danielle Moore, 24, of Winnipeg, was among the victims. In a Facebook post on Saturday morning, Moore wrote that she was excited to be attending a UN environment event in Nairobi.

University of New Brunswick professor Kimberly Davies said Moore was her honours thesis student when she worked at Halifax’s Dalhousie University. She said Moore graduated from Dalhousie with a degree in marine biology in 2017 and was “exceptional in every sense.”

“She excelled at her studies, she was a kind and friendly person, and she was deeply devoted to environmental and human rights causes,” said Davies in an email.

Gladys Kivia, a domestic violence counsellor with the Calgary Women’s Emergency Shelter, said her husband, Derick Lwugi, was also among the victims.

The accountant who worked for the city leaves behind three children, aged 17, 19 and 20, Kivia said. The couple had been in Calgary for 12 years, and Lwugi had been headed to Kenya to visit both of their parents.