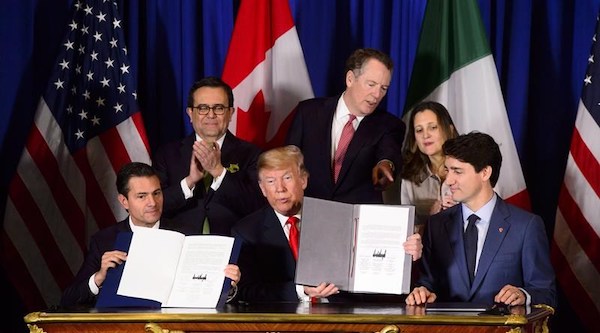 OTTAWA — The push for the speedy passage of the new NAFTA is getting a boost from a big advertising campaign in the United States.

An alliance of U.S. companies, trade associations and lobbyists launched a series of TV commercials and digital ads Monday that it hopes will inspire more Americans to push their congressional representatives to ratify the continental trade agreement.

The United States-Mexico-Canada Agreement, if ratified, will replace the North American Free Trade Agreement. The deal, signed by the three countries’ leaders in November, must be approved by Congress before it comes into force.

U.S. President Donald Trump has called on Congress to support the new deal, which he argues will lift the American farm sector, bring back lost manufacturing jobs and reinvigorate the auto industry.

The campaign by the “Pass USMCA Coalition” promotes what the group sees as the deal’s economic benefits. It arrives as Trump’s trade czar, Robert Lighthizer, expands efforts to meet with Democrats in Washington to discuss their concerns about the agreement.

The coalition’s 16 members include the Canadian American Business Council, the National Association of Manufacturers, the National Chicken Council, Dow and Domino’s Pizza.

Its honorary co-chairs are former New York congressman Joe Crowley and Gary Locke, who served as U.S. ambassador to China, commerce secretary in the Obama administration and governor of Washington state. Both are Democrats, but Rick Dearborn, Trump’s former deputy chief of staff, is the coalition’s executive director.

The initial 30-second TV ad, set to run for three weeks in Maryland, Virginia and Washington, D.C., tells viewers that a “new era of economic and creative prosperity is within reach.”

“The U.S.-Mexico-Canada trade agreement will level the playing field for our workers, consumers and farmers with more free markets, fairer trade and robust economic growth,” says the ad, which cost just over US$1 million. “By increasing exports, raising wages and accelerating innovation, it will propel U.S. trade into the 21st century.”

It then calls on voters to contact lawmakers and urge the deal’s swift ratification.

Trump administration officials, including Lighthizer, have been meeting Democrats in hope of securing bipartisan support for the USMCA.

Democrats, empowered by their new majority in the House of Representatives, and some Republicans have said they won’t vote for NAFTA 2.0 in its current form.

Among the complaints, Democrats say the agreement lacks labour and environmental enforcement measures, and some don’t like its extended drug-patent protections. To enact the deal, U.S. officials say those congressional concerns will have to be dealt with in so-called side letters or in the bill Congress eventually votes on.

Last Friday, House Speaker Nancy Pelosi told the Economic Club of Washington that Lighthizer has been “really very respectful” in his efforts and has listened to members on both sides of the aisle.