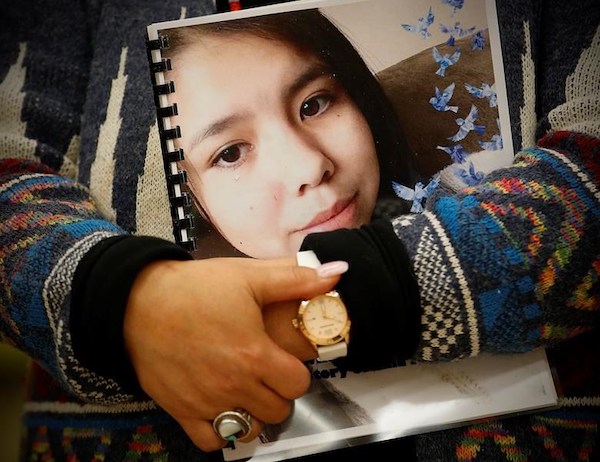 Sagkeeng councillor Marilyn Courchene holds the report as Daphne Penrose, the Manitoba Advocate for Children and Youth, releases a special report on the death of 15-year-old Tina Fontaine at a release event at the Sagkeeng Mino Pimatiziwin Family Treatment Centre on the Sagkeeng First Nation, Man., Tuesday, March 12, 2019. (THE CANADIAN PRESS/John Woods)

SAGKEENG FIRST NATION, Man. — Manitoba’s children’s advocate says there are many children in care who are in danger of being sexually exploited or dying almost five years after an Indigenous teenager’s body was found in a river.

“What’s at stake are the lives of children,” Daphne Penrose said Tuesday as she released her report on the life and death of Tina Fontaine.

“What’s at stake are that children are going to die if we don’t make changes.”

Tina was 15 when her body was found in Winnipeg’s Red River in August 2014. Her death renewed calls for a national inquiry into missing and murdered Indigenous women and inspired volunteer groups to help protect the vulnerable.

The Assembly of Manitoba Chiefs created the First Nations Family Advocate Office and a 24-hour safe space for Winnipeg youth was dedicated in Tina’s memory last May.

The report outlines how social workers and others failed the teen even as it became clear she was spiralling downward and her life was at risk.

The Assembly of Manitoba Chiefs renewed its call for an independent inquiry into Tina’s death.

The report includes five recommendations that touch on justice, education, mental health and child welfare. Penrose said the government needs to act quickly because many other children and youth are still “falling through the cracks of society’s safety net, just like Tina.”

Premier Brian Pallister said the government will look at the recommendations, but he would not commit to them.

“That we have failed our children in the past is indisputable. That we need to make sure that we do everything in our power to give every child opportunity and security is beyond debate,” he said.

“This was awful,” Bennett said as she held back tears. “I don’t think any of us really understand the pain that these kids in care went through.”

A representative of the family said the report’s release means Tina can finally rest in peace and her loved ones can truly mourn.

Penrose looked at records from the medical examiner, police, health authorities, child-welfare agencies and others. It also included interviews with Tina’s family and community members.

The report details how her family was affected by a history of residential schools, the ’60s Scoop and child-welfare agencies.

“She carried a burden that was not her own,” Penrose said.

Tina’s mother was 17 years old and was still a child in care when Tina was born on New Year’s Day in 1999. Both her parents struggled with addictions. Five years later, her father asked Tina’s great-aunt Thelma Favel from the Sagkeeng First Nation to take care of Tina and her sibling. It was a relatively stable time in the young girl’s life.

That changed when Tina’s father was murdered in 2011. Tina’s caregiver tried to get help for the young girl from victim services. But because of questions about who was the teen’s legal guardian, she never received counselling.

In June 2014, Tina went to Winnipeg to try to reconnect with her mother. Favel tried once again to get help when she didn’t hear from the girl.

Penrose said there should be support long before a family is fractured and children are in crisis.

Tina’s high-risk behaviour rapidly escalated in her final two months. She disappeared, was homeless, developed addictions and was sexually exploited.

She reached out several times for help.

On one occasion, Tina called Child and Family Services but no one arranged to pick her up. Workers told the teen to ride her bicycle to a shelter. There’s no evidence she arrived.

“For Tina, more than once in a matter of weeks she was told there were no beds available for her, which essentially left her homeless,” the report says.

It is unacceptable that a child who was frequently missing, known to be sexually exploited and unable to explain physical injuries would be told to find her own way to a safe bed, the report says. Youth with no where to go may be forced into sexual exploitation to meet their basic needs.

“Sadly enough for children, when they are on the streets, nothing comes free,” Penrose said.

The report says Tina disclosed to her child-welfare agency that she was hanging out with a 62-year-old, meth-using man.

Court heard during the second-degree murder trial of Raymond Cormier — who was acquitted last year in Tina’s death — how the young girl was associating with him and that he was sexually attracted to her.

Social workers believed Tina had been sexually assaulted, but the agency still dropped the teen off with a contracted care worker at a downtown hotel.

Tina walked away from the hotel shortly after.

Days later, her 72-pound body, wrapped in a duvet cover and weighed down by rocks, was pulled from the river.