By Darrin Bauming The Canadian Press 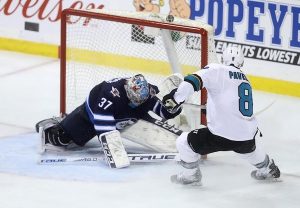 San Jose Sharks’ Joe Pavelski (8) scores into the top of the net with a few seconds left to win the game against the Winnipeg Jets during third period NHL hockey action in Winnipeg, Tuesday, March 12, 2019. (THE CANADIAN PRESS/Trevor Hagan)

The Sharks veteran scored with 4.3 seconds to go in regulation time to lift San Jose over the Jets 5-4 on Tuesday. The win comes exactly five weeks after Pavelski had a short-handed goal in overtime as the Sharks beat Winnipeg 3-2 at Bell MTS Place.

“Back-to-back, coming into a tough building, a good team. We found a gutsy win, for sure,” said the 34-year-old Pavelski, following his 37th goal of the season to keep his club undefeated in March with their sixth-straight win.

Gustav Nyquist scored twice, giving him 19 goals on the season and three in his six games since being traded to the Sharks (43-19-8) in late February.

“He’s got great hockey smarts,” said Pavelski of Nyquist. “He finds himself with the puck in a lot of good areas tonight it was following him around, and a little luck he would have had that third one.”

“He’s been unlucky around the net up until tonight. I think he’s played as well as he did tonight. Especially the first couple games he played, he could have had a couple more,” said DeBoer. “Smart player. He fits with our group. Guys like to play with him. He’s a puck hound out there and does a good job.”

The Jets fell to 12-5-2 against Pacific Division opponents this season, as both clubs entered the night atop their respective divisions in the Western Conference.

“That sucks. (Four) seconds left in the game, it’s terrible. They played a good game, they’re one of the hottest teams in the league right now,” said Jets forward Mathieu Perreault, whose late equalizer was part of his two-point night. “But we gave them a good battle, we were in a tie game until (four) seconds left. If any positives out of this one, we know we can compete with teams like that.”

Aaron Dell made 21 saves for the Sharks.

“We had some good things offensively and in the offensive zone but we were a little slow to our check in the defensive zone. We needed a little more sense of urgency in that end of the ice,” said Jets forward Andrew Copp, whose 10th of the season tied the game up for the first of four times in the game.

Connor Hellebuyck stopped 31 shots as his season record dropped to 28-20-2.

Perreault tied the game up yet again with less than four minutes remaining, with the game seemingly destined for overtime before Pavelski put the game away.

The Jets continue their three-game home stand when the Boston Bruins visit Bell MTS Place on Thursday and the Calgary Flames are in town on Saturday.