Home » The Canadian Press » New Federal Food Guide May Be ‘Out of Reach’ for Most Canadians: Report

New Federal Food Guide May Be ‘Out of Reach’ for Most Canadians: Report 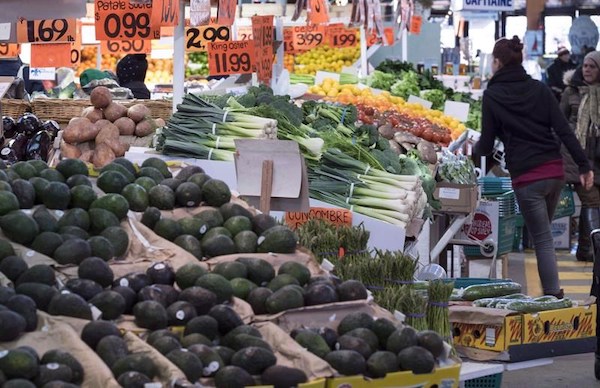 Various vegetables are on display for sale at the Jean Talon Market in Montreal on January 11, 2016. (THE CANADIAN PRESS/Paul Chiasson)

The fruit-and-vegetable-heavy fare touted in the new federal food guide may be too expensive — or perhaps just not enticing enough — to easily form the basis of most Canadians’ diets, a new report suggests.

Researchers at Dalhousie University and the University of Guelph found over 52 per cent of consumers surveyed said they face barriers in adopting the guide’s recommendations.

More than 26 per cent of people cited affordability, with others blaming taste preferences, lack of free time, dietary and cultural restrictions and a lack of availability in their area.

The survey generally found a lack of reliance on Canada’s Food Guide for advice, though 74 per cent of respondents were aware of its 2019 upgrade.

The guide ranked as the sixth most popular source of nutrition information among respondents, following friends and family, social media, magazines and cookbooks.

“I would say that many Canadians are struggling with the concept of how the food guide, the plate they see on the pamphlet, connects with their own reality and frankly, Canadian agriculture,” said Sylvain Charlebois, a food researcher at Dalhousie and lead author on the report.

Using a series of test plates, researchers found that switching from the 2007 food guide to the 2019 upgrade would save an average Canadian family of four 6.8 per cent on annual food costs.

But that number is not predicted to stay stable.

The report cautioned that Canadians’ rapidly changing diets, fluctuating food costs and availability of produce could make the new recommendations less affordable over the next few years.

The number of vegans, vegetarians and “flexitarians” — people consciously eating less meat — is on the rise in Canada, now totalling at around 6.5 million people, a group roughly the same size as the population of the Greater Toronto Area.

The report detailed how fruit and vegetable prices are increasing faster than the price of meats.

If the trend continues as more people cut meat from their diets and turn to plant-based proteins, demand for and price of fruits and vegetables could increase further. That could price people out of the food guide’s suggested diet.

While a lot can change in the world economy over two years, Charlebois said the projections spell trouble for future food security in Canada, where most produce is imported and prices fluctuate.

“Over time, we do believe that there’s going to be an increasing number of Canadian households that will become food insecure, if they are to follow the new food guide,” Charlebois said.

Health Canada said the department welcomes the researchers’ study and is currently reviewing it.

It said Canadians had complained they had trouble following the recommended servings and sizes in the previous guide, and that the cost of food was considered in the revision.

“This is why the new Food Guide is less prescriptive — talking about proportions rather than portions — and its recommendations can be adapted to different dietary preferences,” it said in a statement.

It also noted the guide is just one of many components of approaching healthy eating.

“The findings of the study could potentially help inform our efforts to promote broad awareness and use of the Food Guide among Canadians,” it said.

Charlebois said the science-based guide should be reviewed more frequently, drawing from the expertise of economists, sociologists and historians to better reflect the realities people face when building their diets.

Working with the agriculture sector is also important, Charlebois said, in order to assess whether Canada’s production capacity lines up with what the food guide recommends people eat.