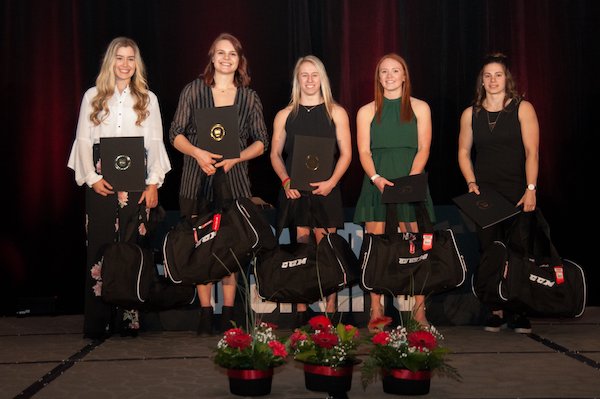 U of M Bisons fifth-year defenceman Erica Rieder (second from left) has been named a 2018-19 First Team All-Canadian. (@UMBISONS / TWITTER)

The fifth-year player was given the honour Wednesday at the U SPORTS Women’s Hockey All-Canadian Gala in Prince Edward Island.

The No. 6 seed Bisons are currently in Charlottetown defending their national championship title and will play the Guelph Gryphons in the quarter-finals at 1 p.m. CT.

It’s the second national honour for Rieder, 22, in her university career. She was also named to the U SPORTS (then CIS) All-Rookie team in 2014-15 at the defence position.

“Erica has asserted herself as one of the top defencemen in the country year after year and I am happy that she has been recognized as such,” said Bisons head coach Sean Fisher.

“She is a terrific leader both on and off the ice and this is a great recognition in her fifth year.”

Rieder finished the 2018-19 regular season as the leading scorer in Canada West among defencemen, scoring four goals and marking 13 assists for 17 points. Rieder also had a team-high +27 in plus-minus, which puts her fourth overall and first among defencemen. The Regina native was also team captain.