By Sidhartha Banerjee and Morgan Lowrie, The Canadian Press 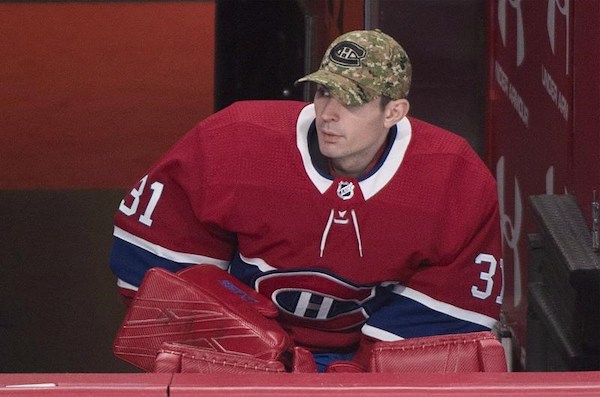 An online post by the wife of an NHL star describing her children’s “alternative” vaccine schedule highlights how the stubborn persistence of misinformation about vaccines is easily spread online, experts say. Montreal Canadiens goaltender Carey Price looks on from the bench during second period NHL hockey action against the Vegas Golden Knights, in Montreal on Saturday, Nov. 10, 2018. (THE CANADIAN PRESS/Graham Hughes)

MONTREAL — An online post by the wife of an NHL star describing her children’s “alternative” vaccine schedule highlights how easily misinformation about vaccines can be spread over social media, experts say.

Angela Price, a prominent lifestyle blogger and the wife of Montreal Canadiens goaltender Carey Price, raised eyebrows this week with an Instagram post in which she described her family’s approach to vaccines and recommended a book written by a U.S. doctor opposed to mandatory vaccinations.

Price followed up in a lengthy blog post Thursday in which said she isn’t anti-vaccine and that her kids received all the necessary shots. But she said the vaccinations were spread out over a longer period than is recommended, and some were delayed until her children are older.

Timothy Caulfield, a Canada research chair in health law and policy at the University of Alberta, said posts like Price’s are problematic because they can increase hesitancy about vaccines.

“I think this type of blogging really demonstrates how these platforms enable the spread of misinformation,” he said in a phone interview. “She probably has a community of parents who follow her and perhaps are like-minded individuals, and they create these confirmation bubbles that allow this kind of misinformation to get traction.”

Caulfield said that while between two and five per cent of the population are what he calls “hard-core anti-vaxxers,” another 20-30 per cent are “vaccine hesitant” parents who have doubts about the safety or efficacy of vaccines.

He said this latter group is vulnerable to rhetoric filtering down from the anti-vaccine lobby, who often use words such as “choice” and “education” as they sow doubts about vaccines.

“This idea that somehow the vaccination schedule is problematic can cause parents to be more hesitant about vaccines themselves,” Caulfield said.

Price declined an interview request Thursday from The Canadian Press and said her Instagram post was removed after being taken out of context following a report in The Montreal Gazette.

But in her blog post she made no apologies for recommending a popular book written by Dr. Bob Sears, a California pediatrician and outspoken critic of mandatory vaccinations.

She said many parents have little understanding of vaccines and what’s in them. “This is the area I was suggesting you should educate yourself on … and these are facts, not just one doctor’s opinion,” she wrote.

Price said her decisions are based on the advice of three doctors in different parts of the country who care for her two daughters.

Fuyuki Kurasawa, director of the global digital citizenship lab at York University in Toronto, said containing the spread of misinformation will take a concerted effort by governments, medical professionals and social media platforms.

He said research has overwhelmingly proven that vaccines are safe and effective, but that information isn’t generally accessible to parents. “The expectation that members of the general public are going to read articles from refereed medical journals such as the New England Journal of Medicine or the Lancet … is unrealistic,” he said in a phone interview.

Kurasawa said public information campaigns need to be better geared to the social media age, and platforms such as Facebook need to do a better job of downgrading and deleting unsubstantiated claims from the anti-vaccine movement.

His remarks echoed those by Health Canada, which announced this week it wants to work with health professionals to address misinformation around vaccines circulating online.

Physicians say the standard immunization schedule is based on science and should be followed to ensure the best protection for children at a time when they are most at risk.

“There are some minor variations from province to province, but I’d say the essential vaccines we recommend for all kids are given via a pretty consistent schedule,” said Dr. Mike Dickinson, a past president of the Canadian Pediatric Society. “Any time someone deviates from that, you’re potentially opening up a window where a child could be at risk for contracting one of these infectious illnesses because they aren’t fully protected.”

Dickinson, who practises in Miramichi, N.B., said it’s tough for parents who are bombarded with information and can’t always discern what is credible.

“Usually, our experience in our clinic is that if we sit down and hear out patients and hear out their concerns, through a dialogue of mutual trust and respect, we are almost always able to proceed following the routine vaccination schedule,” he said.