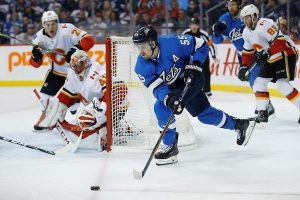 Winnipeg Jets winger Mathieu Perreault felt like he had scored a game-winning goal in the playoffs.

In reality, it was just a regular-season game between two Western Conference heavyweights _ but the Jets’ 2-1 win over the Calgary Flames had extra juice.

“The 2-1 games, you know, this is playoff-type hockey,” said Perreault, who supplied the go-ahead goal on the power play in the second period. “That’s what we want. We’re not looking to score five, six goals and make it like an open game.

“We like the 2-1 games where we defend hard and bury them when we get a chance.”

Perreault notched his 14th goal of the season, helping snap the Flames’ three-game win streak. He now has three goals in his past four games after a 14-game scoreless drought.

The Flames needed at least one point to clinch a playoff spot or have Minnesota lose to the New York Rangers in their Saturday game, but the Wild won 5-2.

Mark Scheifele scored his 34th goal of the season for the Jets (42-25-4) and Connor Hellebuyck made 27 saves for his 30th win of the season.

“We knew it was going to be a good game, and a tight one,” Jankowski said. “Not a lot of space out there, time or space for either team.

Winnipeg remains in top spot in the Central Division. The Flames came into the game in first place in the Pacific Division and Western Conference.

Scheifele opened the scoring with nine seconds remaining in the first period, using a quick pass from defenceman Ben Chiarot across the front of the crease to beat Smith over his glove.

“We’re playing solid,” Scheifele said. “You just have to have that attitude that it’s a playoff game from here on in. You’ve got to ramp yourself up, you’ve got to be ready for that grind. We’ve done that lately.”

Blake Wheeler also had an assist, giving the Jets captain 19 points in his past 12 games, including eight goals.

“2-1 at home against the best team in the West is a … beautiful win,” Wheeler said.

The Flames didn’t get a shot on goal in the opening period until just over six minutes in, although Johnny Gaudreau and Jankowski each hit a post. Shots on goal were 7-7 at the first intermission.

“We could have got one of those to go that went off the post early, it would have made a little bit of a difference, for sure,” said Flames head coach Bill Peters, whose team was playing the second of back-to-back games.

Winnipeg had its third power play of the game when Flames forward Mikael Backlund was assessed a double minor for high sticking Bryan Little in the second period, but it was Jankowski who scored shorthanded 15 seconds into the penalty kill when he redirected an Elias Lindholm pass into the net.

Flames defenceman Mark Giordano picked up an assist, extending his point streak to four games. He has five helpers in that span.

But the Jets didn’t waste the rest of the man advantage as Perreault regained Winnipeg’s lead at 10:18 of the second off a loose puck.

Calgary had a power play with 3:22 left in the third period after Scheifele was dinged for tripping, but none of its three shots on goal got by Hellebuyck.