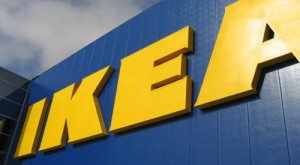 WINNIPEG — A 17-year-old boy is in police custody after he allegedly pointed a gun at two people in the parking lot of IKEA on Tuesday night.

Police were called to the south Winnipeg store at around 7 p.m. for a report of someone armed with a gun.

Police say a woman and a male youth were leaving the parking lot when one of them saw a teen point what appeared to be a black handgun at their car. The victims fled and called police.

Officers quickly found the teen and determined it was a simulated firearm. They also found a knife in his possession.