Home » The Canadian Press » ‘It Has to Send a Message:’ Broncos Families Await Sentencing for Truck Driver

‘It Has to Send a Message:’ Broncos Families Await Sentencing for Truck Driver 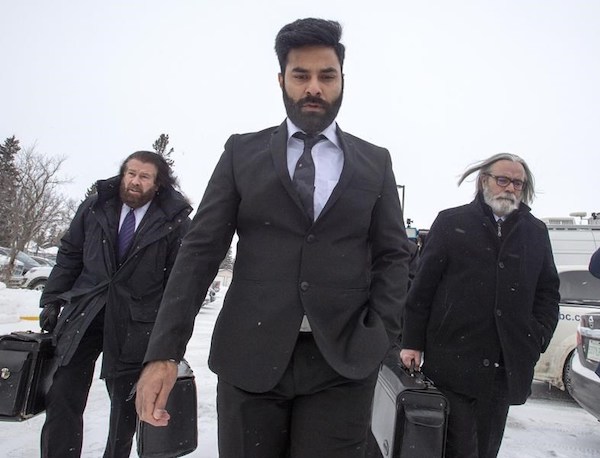 Jaskirat Singh Sidhu, the driver of the truck that collided with the bus carrying the Humboldt Broncos hockey team arrives with his lawyers Mark Brayford, left, and Glen Luther, right, for closing arguments at his sentencing hearing Thursday, January 31, 2019 in Melfort, Sask. Kevin Matechuk says he will never, never forgive the semi driver who caused the deadly Humboldt Broncos bus crash. (THE CANADIAN PRESS/Ryan Remiorz)

Matechuk’s 19-year-old son Layne of Colonsay, Sask., is still coping with a brain injury he suffered in the collision last April. The young man’s recovery is expected to be a long one.

The trucker who blew through a stop sign and caused the crash, Jaskirat Singh Sidhu of Calgary, is to be sentenced in Melfort, Sask., on Friday.

“I know he purposely didn’t go out to kill all those people but he did … run that stop sign,” Matechuk said recently from the family’s temporary home in Saskatoon.

Sixteen people were killed and 13 were injured when the transport truck drove into the path of the junior hockey team’s bus at a rural Saskatchewan intersection.

Court heard that Sidhu went by four signs warning about the upcoming intersection before he came up to an oversized stop sign with a flashing light. His lawyer told court Sidhu was an inexperienced driver distracted by a flapping tarp on the back of his load.

Sidhu, 30, pleaded guilty to 29 counts of dangerous driving and apologized in court. The Crown has asked that he serve 10 years in prison. The defence did not propose a specific sentence but said other cases point to between 1 1/2 to 4 1/2 years.

Family members submitted 90 victim impact statements during an emotional sentencing hearing in January. Some said they forgive Sidhu, while others said they are too angry.

“It’s funny how the wide range of different people feel and everyone’s entitled to their own opinion,” said Matechuk.

Melanie Smith of Leduc, Alta., whose 20-year-old son Tyler was also injured, said she’ll be glad to have the court case over with.

“We’re content about how it turned out with him pleading guilty to all 29 counts and the emotion he showed,” she said.

“We don’t really have any thoughts either way on what he ends up getting sentenced. The problem is you either have to forgive or you somehow have to get past whose fault it was. It was his fault. And as a family we’re content.”

He said forgiveness won’t bring his son back. And he’s going to be disappointed in whatever sentence Sidhu gets.

“I don’t know if there’s any number that would make me happy,” he said.

Michelle Straschnitzki’s 19-year-old son, Ryan, from Airdrie, Alta., was paralyzed from the chest down. She said she has days when she would like to think forgiveness is possible.

But her anger overwhelms those feelings.

“There are days that it’s no — no matter what. Nothing’s going to be OK again and 16 people are gone and the lives of 13 children are still in flux.”

She wants the judge to give Sidhu a harsh sentence.

“It has to be more than a slap on the wrist. It has to send a message,” she said.

“Unfortunately it won’t really change anything, but it has to make a difference and change people’s minds.”