By Bill Graveland and Stephanie Taylor, The Canadian Press 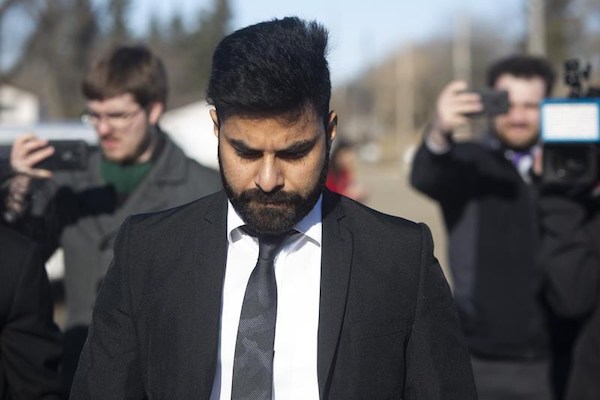 MELFORT, Sask. — A truck driver who caused the deadly Humboldt Broncos crash has been sentenced to eight years in prison.

Jaskirat Singh Sidhu of Calgary had pleaded guilty earlier this year to 29 counts of dangerous driving. He stood quietly and looked ahead at the judge as he was sentenced Friday.

Judge Inez Cardinal told court in Melfort, Sask., that she approached the sentence knowing “nothing can turn back the clock.”

She also noted that Sidhu’s remorse and guilty plea were mitigating factors, but added she had to consider the number of people who died or were severely injured and face lifelong challenges.

Sidhu barrelled through a stop sign and into the path of the junior hockey team’s bus at a rural Saskatchewan intersection last April.

Sixteen people were killed and 13 were injured.

Cardinal said the collision was avoidable.

“Mr. Sidhu had ample time to react … had he been paying attention,” she said.

“Somehow we must stop this carnage on our highways.”

The Crown wanted the 30-year-old Sidhu to be sent to prison for 10 years, while the defence said other cases suggested a range of 1 1/2 to 4 1/2 years.

Cardinal began her decision by reading aloud each victim’s name. She said the nearly 100 victim impact statements from families were staggering.

The judge said the hockey players who died were gifted athletes, while others on the bus were dreaming about families or had already started them.

“Families have been torn apart because of the loss,” Cardinal said. “They are prone to depression, anxiety or outbursts.”

She also spoke of the survivors, who she suggested “are putting on a brave face in an attempt to be strong.”

Cardinal started the sentencing by acknowledging it would be emotional and asked people not to talk in court.

Sidhu’s lawyers had said he was remorseful and is likely to face deportation to his home country of India after he serves time.

Cardinal said she believed Sidhu was sincere in his remorse.

She also spoke of Sidhu’s actions in the moments before the crash.

“This was not a momentary loss of attention. He had ample time to stop his unit. Mr. Sidhu wasn’t speeding but his speed was excessive.”

A sentencing hearing in January heard that Sidhu was going between 86 and 96 km/h when he passed four signs warning him about the upcoming intersection before he came up to an oversized stop sign with a flashing light.

Crown prosecutor Thomas Healey said Sidhu should have seen the busy highway in front of him or a car that was stopped across the road and waiting for the Broncos bus to pass.

He described the truck as a rocket that barrelled into the intersection, which gave the bus driver no time to avoid the crash.

Defence lawyer Mark Brayford said Sidhu was hired by a small Calgary trucking company three weeks earlier. He spent two weeks with another trucker before heading out on his own for his first time.

Brayford suggested Sidhu was distracted by a flapping tarp on the back of his load of peat moss.

The Humboldt Broncos hockey team issued a statement soon after the sentence.

“Having this legal matter settled and the sentencing complete is a big step in the healing process for the survivors, grieving families, our organization and the community of Humboldt and surrounding area,” said president Jamie Brockman.

“The sentence is subject to varying opinions but what is important is that Mr. Sidhu pleaded guilty, has shown remorse and has remained accountable for his careless actions.”