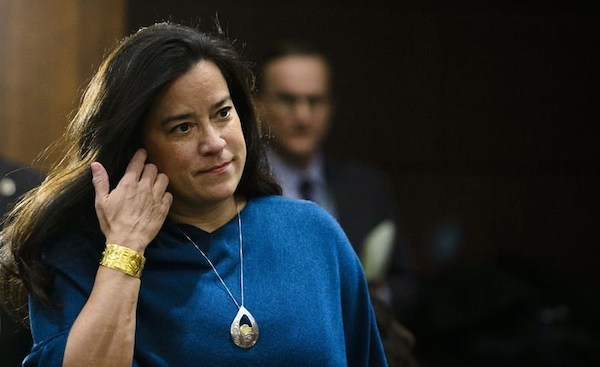 Jody Wilson-Raybould appears at the House of Commons Justice Committee on Parliament Hill in Ottawa on Wednesday, Feb. 27, 2019. Wilson-Raybould plans to reveal more – in writing – about her accusation that she faced improper pressure to prevent the criminal prosecution of SNC-Lavalin. (THE CANADIAN PRESS/Sean Kilpatrick)

OTTAWA — Jody Wilson-Raybould plans to reveal more — in writing — about her accusation that she faced improper pressure to prevent the criminal prosecution of SNC-Lavalin.

The former attorney general has written to the House of Commons justice committee to advise that she intends to make a written submission, as well as provide “copies of text messages and emails” that she referenced when she told her story in person last month.

“Related to these requests, I also have relevant facts and evidence in my possession that further clarify statements I made and elucidate the accuracy and nature of statements by witnesses in testimony that came after my committee appearance,” Wilson-Raybould writes.

Her written statement will be “within the confines of the waiver of cabinet confidence and solicitor-client privilege,” the letter notes.

The Liberal-dominated committee shut down its investigation into the affair on Tuesday, with Liberal members concluding no rules or laws were broken.

Wilson-Raybould says the additional information she will provide in her written submission will stay within the confines of the waiver she has already been granted, covering the period last fall when she claims to have been pressured up to Jan. 14 when she was shuffled out of her dual role as justice minister and attorney general.

Her letter comes the day after former cabinet minister Jane Philpott fanned the flames of the SNC-Lavalin fire in an interview to Maclean’s magazine, saying there is “much more to the story” — a report that landed in the midst of a Conservative-orchestrated filibuster over the controversy.

The filibuster, which continued until almost 1 a.m. Friday, was intended to protest Prime Minister Justin Trudeau’s refusal to offer a blanket waiver of privilege and confidentiality that Wilson-Raybould has claimed is necessary if she is to fully tell her side of the story.

Philpott, who resigned early this month as Treasury Board president, told Maclean’s that she raised concerns with Trudeau, during a Jan. 6 discussion about an imminent cabinet shuffle, that Wilson-Raybould was being moved out of Justice because of her refusal to intervene in the SNC-Lavalin case.

“I think Canadians might want to know why I would have raised that with the prime minister a month before the public knew about it. Why would I have felt that there was a reason why Minister Wilson-Raybould should not be shuffled?” she said. “My sense is that Canadians would like to know the whole story.”

But Philpott actually appears to already be free to talk about that Jan. 6 conversation with Trudeau: The government has waived solicitor-client privilege and cabinet confidentiality for last fall, when Wilson-Raybould alleges she was improperly pressured, until Jan. 14, when she was moved to the Veterans Affairs portfolio. The waiver applies not just to Wilson-Raybould but to “any persons who directly participated in discussions with her” relating to the criminal prosecution of SNC-Lavalin for alleged corrupt practices in Libya.

That waiver allowed Wilson-Raybould to testify for nearly four hours before the House of Commons justice committee.

On Thursday, Trudeau rejected the opposition parties’ contention, echoed by Philpott, that a broader waiver is required to cover the period between Jan. 14 and Wilson-Raybould’s resignation from cabinet a month later.

“It was extremely important that the former attorney general be allowed to share completely her perspectives, her experiences on this issue, and that is what she was able to do,” he said after an announcement in Mississauga, pumping up the latest budget’s promise to invest $2.2 billion more in municipal infrastructure projects.

“The issue at question is the issue of pressure around the Lavalin issue while she was attorney general and she got to speak fully to that.”

Trudeau also gave his version of the Jan. 6 conversation with Philpott, during which he informed her she would be moving to Treasury Board and that Wilson-Raybould would be taking her place at Indigenous Services. His version echoed the testimony of his former principal secretary, Gerald Butts, to the justice committee.

“She asked me directly if this was in link to the SNC-Lavalin decision and I told her no, it was not,” Trudeau said. “She then mentioned it might be a challenge for Jody Wilson-Raybould to take on the role of Indigenous Services and I asked her for her help, which she gladly offered to give, in explaining to Jody Wilson-Raybould how exciting this job was and what a great thing it would be for her to have that role.”

Wilson-Raybould ultimately turned down the move to Indigenous Services and Trudeau moved her instead to Veterans Affairs. She resigned a month later.