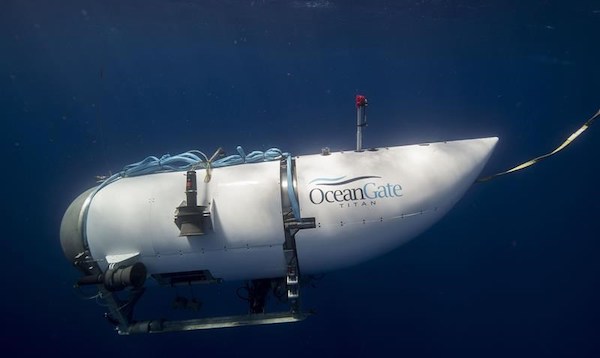 OceanGate Expedition’s exploratory submarine Titan is shown in a handout photo. Adventure tourists with money in the bank have a new bucket list item: a spot on a submarine diving 3,800 metres down to the rusting remains of one history’s most iconic shipwrecks. (THE CANADIAN PRESS/HO-OceanGate)

ST. JOHN’S, N.L. — Adventure tourists with money in the bank have a new bucket list travel item: a spot on a submarine diving 3,800 metres down to the rusting remains of one history’s most iconic shipwrecks.

Week-long expeditions to the Titanic are set to depart from St. John’s, N.L., this June, in the first manned surveys of the decaying vessel since 2005.

A ride on the aptly named Titan submarine costs just over $168,000 per ticket.

Stockton Rush, CEO of OceanGate Expeditions, the U.S. company running the show, defended the hefty price tag, saying the trip is more than worthwhile for an experience he said is rarer than space travel.

“What we’re doing is something that’s going to add to the historical record of the Titanic — what is it like now, how is it decaying, what kind of marine life is there. We’re going to be making real discoveries,” Rush said in a phone interview from Washington state.

“It’s going to be a different experience but one that’s got this greater good component.”

The “mission specialists,” as passengers are called, range in age from their early 20s to late 70s. They will take a hands-on role in data gathering, with training in underwater photography, sonar operation and other note-taking duties.

Less strenuous than space travel, Rush said the biggest physical requirement is agility — like the ability to climb a ladder or stand on a chair without assistance, for example.

“If you can board an airplane on your own and haul your bag into the luggage container, you probably can do this,” he said.

There are a number of “unknown unknowns” to explore on each week-long mission at the site of the ocean disaster. The accident claimed the lives of more than 1,500 people in April 1912, after the Titanic hit an iceberg about 600 kilometres off Newfoundland’s southeast coast.

Explorers will seek to answer the question of how fast “rusticles,” or bacteria, are devouring the ship’s remains.

Bacterial damage done to the vessel since the last robotic survey in 2010 may have revealed previously unseen corners of the wreck, Rush said, possibly exposing more artifacts and personal effects from the so-called unsinkable ship’s drowned travellers.

Each dive on the five-person submarine will last eight hours. When not exploring the depths of the cold Atlantic, mission specialists will be able to help assemble a virtual reality project with partner Virtual Wonders. The project aims reconstruct the hull and eventually bring the wreck site to a wide audience.

Only two of the 54 spots remain open for the six 2019 expeditions, and more are available for 2020. Rush anticipates the findings from this year’s expeditions could uncover more clues for OceanGate to chase on return visits.

Larry Daley, a local logistics specialist, said the attention to Newfoundland could be “huge” for the local economy, and for preservation of the Titanic’s tragic story.

The St. John’s-based Titanic expert has worked logistics for dozens expeditions since the late 1990s, including a production role for James Cameron’s 2003 Ghosts of the Abyss documentary. He’s even been one of the lucky few to dive down to the infamous wreck, in a Russian submersible back in 2003.

Daley saw international interest boom after Cameron’s 1997 blockbuster, “Titanic,” reintroduced the world to the doomed vessel’s story — and he said 2019 could be the biggest year for Titanic tourism since.

“They’re bringing people in from all over the world that are going to get to experience what I did, but on a new platform, new technology and so on. And it’s going to draw eyes back on Titanic again,” Daley said.

The historical connections to Newfoundland raise the possibility of other adventures for guests, like iceberg tours and exploring the island’s role as the source of radio transmissions that told the world the unsinkable ship was going down.

“I think this is the start of hopefully a long term operation and adventure tourism,” Daley said.

“I’m a big proponent (of), you know, keeping the story alive, the Newfoundland and Labrador connection, but respectfully.”

OceanGate’s submarine has had its own share of bad luck leading up to the big dives. Expeditions were scheduled to depart last June, but the Titan was damaged in a lightning storm while parked in the Bahamas for test dives.

Barring other unpredictable catastrophes, Rush said the sub is ready to go this summer, and said he hopes the Titan will return to the wreck for years to come.

“As long as there are, I think, discoveries to be made and clients who want to help us do that, we plan to keep going, and I expect that will be for many years,” Rush said.

Having seen the wreck himself in 2003, Daley said the experience offered an incredible look at bio-luminescent deep-sea life. He recalls dropping through miles of darkness before seeing the remains of the ship, adorned with memorial plaques left by previous expeditions honouring the lives lost in the tragedy.

“It’s very emotional when you’re down there,” Daley said. “When you fly up all over the wheel house, what’s left of it, and you see the memorial plaques, that sticks right to you … You took a moment there, realized where you were, and paid respects because, you know, it’s a grave site.”

Respect for the dead is an essential part of any exploration of the disappearing site, Daley said, but explorations like OceanGate’s can resurface historical details that give new life to a tragically true tale that’s captured the world’s attention for over a century.

“It does bring a story back to the surface for people to learn about,” he said.

← Previous: Judges on Twitter? Ethical Guidance for Those on the Bench Under Review Next: CONTEST: Win Tickets to 'Kinky Boots' at Centennial Concert Hall →
Tags: Canada