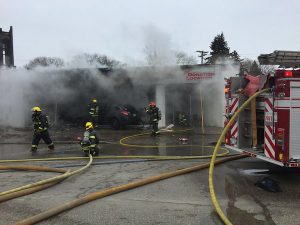 Firefighters battle a blaze at the Goodwill Store on Pembina Highway after a vehicle crashed into it on Tuesday morning. (CITY OF WINNIPEG)

Winnipeg firefighters and emergency crews doused a blaze Tuesday at a south end thrift store after a Subaru Outback crashed into the front of the building.

The Goodwill Store at 1540 Pembina Highway was engulfed in flames at around 11:15 a.m., sending thick plumes of black smoke into the air and snarling traffic along northbound Pembina.

The Winnipeg Fire Paramedic Service says crews began a defensive attack and were later able to make it inside the building.

The driver of the vehicle was transported to hospital in stable condition. Staff and customers safely evacuated before firefighters arrived. Buildings to the north and south of the store were evacuated as a precaution.

The city says as crews remain on scene, northbound traffic along Pembina Highway is expected to be impacted.

It’s unclear what led to the collision and no damage estimates are available.