Home » The Canadian Press » Nothing Could Be Done to Stop Emaciated Grizzly That Killed Mom, Baby: Coroner

Nothing Could Be Done to Stop Emaciated Grizzly That Killed Mom, Baby: Coroner 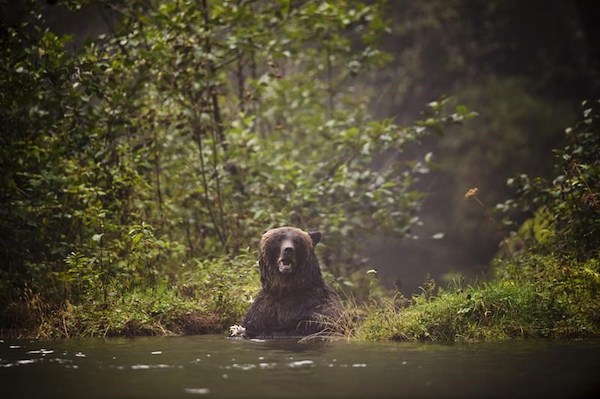 A Grizzly bear searches for food as he fishes in Khutze Inlet near Princess Royal Island, B.C. Thursday, September 19, 2013. There was nothing a woman could have done to prevent a predatory attack by a starving grizzly bear that killed her and her 10-month-old daughter, the Yukon Coroner’s Service has concluded. (THE CANADIAN PRESS/Jonathan Hayward)

WHITEHORSE — There was nothing a woman could have done to prevent a predatory attack by a starving grizzly bear that killed her and her 10-month-old daughter, the Yukon Coroner’s Service has concluded.

The service has released the results of its investigation into the deaths of 37-year-old Valerie Theoret and her baby Adele Roesholt outside their cabin near Einarson Lake on Nov. 26.

Theoret and her partner were experienced backcountry users who kept a clean camp and made sure there was nothing on the site to attract bears, said Yukon chief conservation officer Gordon Hitchcock.

“What makes this incident especially tragic is that the family took proper precautions to prevent something like this from happening,” he told a news conference Wednesday.

“To say the victims were at the wrong place at the wrong time sounds trite, but our investigation shows that more than anything else, this was an unfortunate tragedy and that little could have been done to prevent it.”

The investigation found Gjermund Roesholt — Theoret’s partner and the baby’s father — left the cabin that morning to check one of their traplines. On his way back in the afternoon, he noticed bear tracks starting about one kilometre away from the cabin.

However, the tracks veered away from his snowmobile trail and he returned to the cabin to find it empty. He started to run a trapline nearby and about 240 metres from the cabin he heard a growl before a grizzly came out of the bush and charged at him.

He fired four shots, killing the bear, before discovering the bodies of his partner and baby daughter, the coroner’s report says.

Roesholt covered the bodies and activated an emergency beacon. The RCMP and Conservation Officer Services arrived the next morning and began gathering evidence.

The evidence showed that the bear found the trapline near the cabin and hid behind the trees before attacking Theoret and the baby, who was in a carrier on her mother’s back, Hitchcock said.

“The attack appeared sudden. All evidence suggests Valerie did not have time to react. This was clear evidence of predatory behaviour,” he said.

A predatory attack is when an animal preys upon another for food and approaches them silently, said Hitchcock. Bears do not normally seek humans as prey and these types of attacks are extremely rare, he said.

A necropsy showed the 18-year old male grizzly was too emaciated to hibernate and in pain because it had eaten a porcupine to avoid starving to death and the quills were penetrating its digestive tract.

Theoret was not armed and the couple had stopped wearing bear spray once the weather turned cold, but she wouldn’t have had time to react and use a weapon, Hitchcock said.

“This was a tragic chance occurrence,” he said.

The attack happened in a remote area with dense wilderness and extensive bear habitat. The investigation did not examine the broader area to find any explanation for why the bear was in such a desperate state, Hitchcock added.

“This is a case of an individual bear’s health issues, not a population issue,” he said.

The conservation officer service has accepted all the coroner’s recommendations and it’s continuing to provide education about bear safety, including increasing awareness that bear encounters can happen all year round, Hitchcock said.

Generally, bears hibernate from November through spring, but there have been sightings in December and January in the past, he said.

Hitchcock said this is the first double fatal grizzly bear mauling in Yukon to his knowledge.

Chief coroner Heather Jones told the news conference that the family is suffering from “unimaginable grief.”

“By acknowledging the last moments of Valerie and Adele, we provide dignity and respect to their passing by not seeing their deaths as statistics,” Jones said.

“They were daughters, a grandchild, a life partner, a mother, a teacher, good friends, very good friends and members of our own community, and I’m sure so much more.”

Theoret taught French immersion at an elementary school and was active in the Whitehorse community.

Friends have said she and Roesholt were experienced trappers and it was their third season at the cabin, where they had been for three months before the attack.

← Previous: Settlement Ends Lawsuit by Woman Who Said She Was Tackled in Courthouse Next: Manitoba Increasing Minimum Wage by 30 Cents on October 1 →
Tags: Animals | Canada | Death