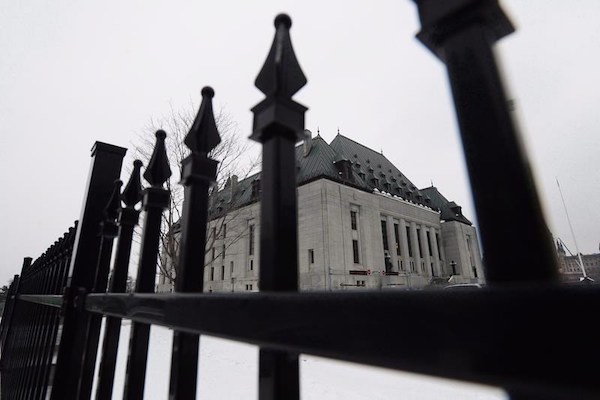 The Supreme Court of Canada is shown in Ottawa on January 19, 2018. (THE CANADIAN PRESS/Sean Kilpatrick)

OTTAWA — Making an accused person wait in jail before trial should be the exception, not the rule, the Supreme Court of Canada says in a decision that affirms a key legal safeguard intended to ensure speedy justice.

In a 9-0 ruling Thursday, the high court said people accused of crimes are automatically entitled to periodic reviews of their detention under provisions set out in the Criminal Code.

In clarifying how the provisions should work, the court said Parliament wanted to make certain that people awaiting trial have their cases reviewed by a judge at set points in time to consider whether keeping them in jail is justified.

The ruling comes three years after the Supreme Court set out a groundbreaking new framework for determining whether a criminal trial has been unreasonably delayed in the drug case of Barrett Richard Jordan.

“Delays in routine bail and detention matters are a manifestation of the culture of complacency denounced by this Court in Jordan, and must be addressed,” Chief Justice Richard Wagner wrote on behalf of the court in Thursday’s decision.

The case landed at the high court as a result of an appeal by Corey Lee James Myers, who was arrested on several firearms charges in British Columbia three years ago.

Though Myers eventually pleaded guilty to reduced charges, he also challenged a decision to keep him in custody pending trial.

At issue was section 525 of the Criminal Code, which outlines procedures for detention review hearings aimed at preventing accused people from languishing in jail before trial.

Although Myers’ appeal is now moot, the Supreme Court exercised its discretion to examine the case because practices concerning detention review hearings vary widely across the country with regard to when they happen, whether they are mandatory and factors to be considered.

In the decision, Wagner wrote that the right to liberty and the presumption of innocence are fundamental tenets of the criminal justice system.

“In the pre-trial context, release — at the earliest opportunity and in the least onerous manner — is the default presumption in Canadian criminal law. Pre-trial detention is the exception, not the rule.”

Being detained prior to trial can have “serious detrimental impacts” on the accused person’s ability to mount a defence and comes at a significant cost to liberty, mental and physical well-being, family life and employment, Wagner wrote.

However, a significant number of people await trial behind bars at any given time in Canada, he noted. In some cases, accused people are held in provincial jails — often in dire, overcrowded conditions — for the entire length of the pre-trial process, which can amount to hundreds of days in custody, he added.