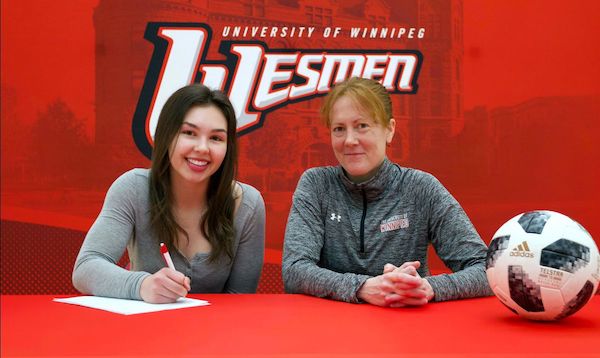 The University of Winnipeg Wesmen women’s soccer team has signed Taryn Raabe to a letter of intent for the 2019 season.

The goalkeeper out of Dakota Collegiate and Bonivital SC is the fourth recruit for head coach Amy Anderson‘s class this upcoming season, joining midfielders Emma Friesen of River East Collegiate and McKaely Snider of U of W Collegiate, and midfielder/forward Tia Lecox of Ottawa.

“She’s one of the more athletic keepers we’ve brought in, and the great thing about her is she’s going to progress,” Anderson said of Raabe.

“She’s fit, she’s a strong worker and I think, too, playing with the boys has helped for sure. I see confidence in herself and her athletic ability and you have to be quite confident to play with the boys.”

Raabe is a multi-athlete, who also competed in volleyball, handball, track and badminton. The Dakota product will enrol in the Faculty of Kinesiology and have five years of eligibility.

Raabe’s arrival to the Wesmen almost didn’t happen, if it wasn’t for a friend of hers always signing on the dotted line.

“It was kind of a last-minute thing for me. I think it was just the fact that one of my friends (Snider) signed and she was really excited about it, and it was just seeing her excitement that I thought maybe I was going to be missing out. It was my fear of doing it, but seeing her (excitement) eased me into it.”