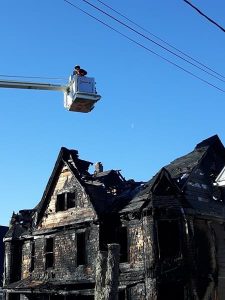 A firefighter surveys the damage following a house fire in Windsor, N.S., in this handout photo. (THE CANADIAN PRESS/HO – Windsor Fire Department)

WINDSOR, N.S. — A Nova Scotia couple was forced to drop their baby and toddler from the second floor of their fast-burning house into the waiting arms of a firefighter early Thursday.

Windsor, N.S., fire Chief Jamie Juteau spoke to The Canadian Press about the dramatic rescue, which saw volunteer firefighters, police, neighbours and bystanders work together to save the family of four from the blaze.

Here’s his account of what happened, as told to reporter Brett Bundale:

We’re volunteer firefighters here in Windsor, so we were at our residences. At roughly 2:15 in the morning, a call came in from our dispatcher that a vehicle was on fire and it was spreading to a house. As I was leaving my residence, the dispatcher said we were getting multiple calls and the house is now on fire.

I went around the side of the house and I could hear people yelling.

They were on a second floor balcony out back, like the deck. They couldn’t get out the front, the whole front was on fire.

One guy was holding a toddler like, over the deck’s privacy wall. It was about four feet tall. They couldn’t get down off of there, so I just told him, ‘Drop him,’ and I got him. I ran and took him over to a civilian who took him to the ambulance. I went back and they dropped another one, a baby, who was in a car seat.

Then the other firefighter who was there from the other department was helping the gentleman and the lady. He told them to kick the wall down and gentlemen jumped off one side, and we helped him out of the bushes. And then the firefighter and the Mountie helped the mom step across the void and onto the baby barn and then they got her down. So it really went well. They were fine.

It was actually the neighbour (living on the other side of the duplex) who made a big difference. The neighbour noticed the fire in the first place, came out the front door, went up and actually roused the neighbours on one side and woke them up and got them to get out. It was a very brave thing to do, and had she not done that I would be fearful of what the outcome would be today.

Then she let her neighbours (on the other side of the duplex) know, but by that point they couldn’t get out the front because the whole front was on fire. I feel that the neighbour really made a difference here.

Then we turned our concern to the burning building, as it was in very close proximity to other buildings on that street. We have to contain the fire at that point from spreading up to the street. And luckily we did that. There was some minor melted siding on a neighbouring building, but otherwise it didn’t spread. My crews are very efficient. They know their job. They did exactly what they’re trained to do.

It is nice to see something work out.