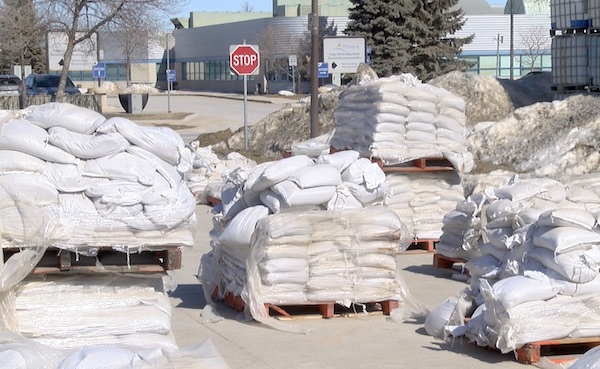 Sandbags are available for residents at three city locations, including this one at 1220 Pacific Avenue. (CHRISD.CA FILE)

The City of Winnipeg says 123 properties may be at risk of river flooding this season, requiring homeowners to build sandbag dikes, if needed.

The province’s latest flood outlook, released on Wednesday, predicts river levels at or slightly above 2009 flood levels on the Red River.

The city says homeowners at risk of flooding have been hand-delivered notices. Officials will also be determining the location of potential dikes. Those homeowners who are concerned about their properties flooding, but haven’t heard from the city, should contact 311.

Volunteers are not needed at this time to help with sandbagging efforts.

River levels at the James Avenue gauge in Winnipeg were at 0.74 feet on Friday morning.

Winnipeg residents can pick up sandbags for free between 8 a.m. and 6 p.m. at the following locations: